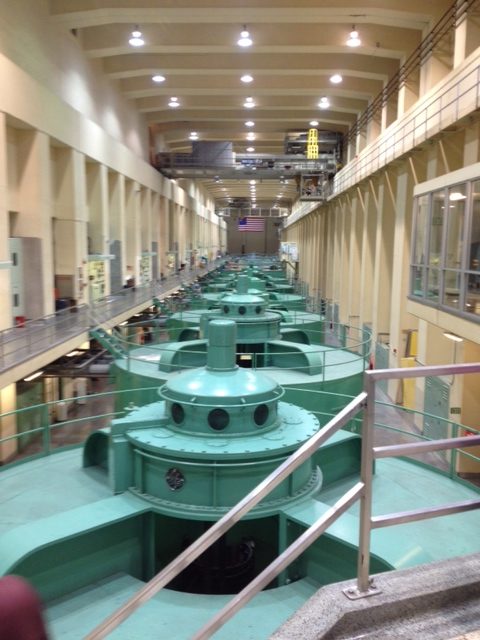 Bear with me here. I’m going to throw out a lot of numbers.

The above numbers come from the 2013 Pocket Guide: Fast Facts About the Columbia River Basin, published by the Northwest Power and Conservation Council. They are interesting, especially when you consider that for the entire U.S., hydropower only accounts for about 6% of total electricity produced.

Now, look at the same numbers from 2010, and some interesting trends emerge. According to Andy Dunau, executive director of the Foundation for Water and Energy Education (thanks for the heads-up on this story!), in 2010 hydropower provided 54% of all generating capacity in the region, coal 25%, natural gas 12%, wind and nuclear 4% each. (I presume, although I don’t have actual numbers, that biomass and other were 1% in 2010.)

What does all of this mean for you, my interested readers?

1. Hydropower has risen as a percent of generating capacity. So have natural gas and wind.
2. Conversely, coal and nuclear’s share has decreased.

I am going to go out on a limb and propose my insights into what is driving this change in direction. All of them tie back to hydropower, and hopefully will fuel (pun intended) its continued growth in the region.

First, according to NWPCC, the Pacific Northwest has 7,333 MW of capacity from wind turbines (out of a total generating capacity of 61,300 MW). Wind is being added to help meet state renewable portfolio standards, given that many exclude existing hydro as renewable. For example, in Washington, only incremental electricity produced as a result of efficiency improvements at hydro plants completed after March 31, 1999, is eligible. In Oregon, primarily hydro plants that became operational on or after Jan. 1, 1995, are eligible. A provision is made to include “a limited amount of hydropower from facilities operational before 1995,” but there are conditions that limit this to 50 average MW or less. At this time, Idaho does not have an RPS. So, we can see why wind has grown.

The reasons behind the growth in natural gas are equally obvious: record low prices and a faster timeline for developing these facilities compared with hydropower.

The decrease in coal is easy to explain as well. In the face of climate change, opposition to coal in the region is strong. In addition, the Environmental Protection Agency has tightened its rules regulating air pollution, resulting in the shutdown/retirement of many coal-fired power plants.

The decrease in nuclear, in my opinion, arises from the fact that there is only one commercial nuclear facility in the region and it was shut down for 40 days in 2013 for maintenance and refueling.

Now is the time where I talk about what I think these numbers mean for the future of hydropower in the region.

1. Hydropower, particularly pumped storage, will continue to be an attractive means of balancing intermittent power from wind plants on the grid. Recently, we reported on a study from Stanford University that indicated pumped-storage hydropower projects are likely the best means of storing energy from wind and solar plants. These researchers said pumped storage offers one of the highest ratios in terms of “energy stored on invested” of any storage system currently available and also provides a number of ancillary benefits that make it attractive.

2. Hydro facilities are an important element in the battle against climate change. Hydroelectric plants do not directly emit greenhouse gases or other air pollutants and they can be (to an extent) scheduled to produce power as needed, depending on water availability. They also are relatively inexpensive to operate; they are one of the least expensive forms of low-carbon electricity, according to the California Institute for Energy and the Environment.

What about you? What do you think of these numbers? What do you think is driving them? Do you agree or disagree with my assessment? Comment below so we can all have a better picture of the future for hydropower in the Pacific Northwest.