The unit was designed by Atlantis Resources’ turbine and engineering services division, and Lockheed Martin Corp. designed the unit’s nacelle.

It is one of four tidal turbines deployed at Meygen and all are grid-connected via a control building onshore at Ness of Quoys in Caithness. 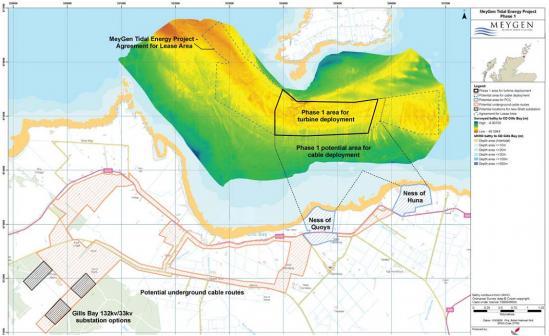 On Sept. 12, 2016, HydroWorld.com reported the first of three 1.5-MW Andritz Hydro Hammerfest horizontal-axis tidal turbine was unveiled for MeyGen Phase 1A. Phase-1A is the build-out phase of the MeyGen Tidal Energy Project in the Inner Sound of Pentland Firth.

The Hammerfest units are about 15 meters in height, can reach rated power at 3 m/s flow-speed and have active pitch, full-yaw capability in their 18-meter-rotor diameter.

In November 2016, Atlantis announced the first power had been delivered to the grid from the first Andritz Hydro Hammerfest turbine.

Construction for the next 6-MW phase of the MeyGen project is due to commence later this year.

MeyGen could ultimately have a capacity of nearly 400 MW, pending expansions after this phase.