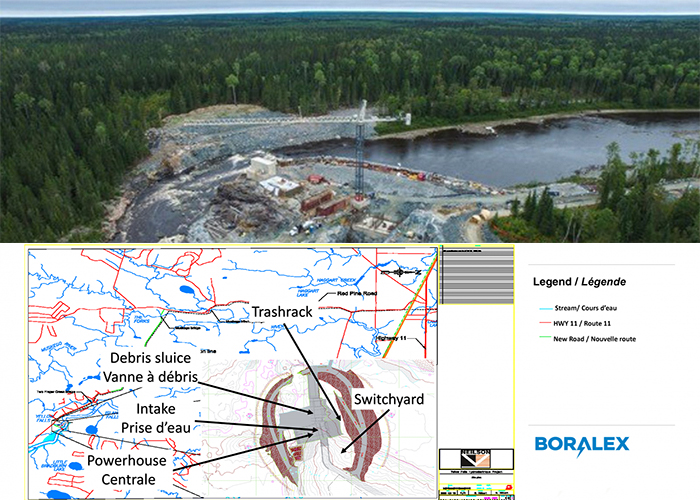 Canadian renewables developer Boralex Inc. said today it has closed US$55.6 million in financing for the 16-MW Yellow Falls small hydropower project on the Mattagami River near the town of Smooth Rock Falls in Ontario, Canada.

The Yellow Falls project is a collaboration with the Taykwa Tagamou Nation and the Mattagami First Nation, which have contractual rights to acquire an interest of up to 31.25% in the scheme.

In April, HydroWorld.com reported that Boralex began construction work on the project and expects to commission the facility at the end of next year’s second quarter.

The intake and powerhouse will be combined in a close-coupled arrangement near the west back of the river, with two 8 MW turbine-generator units housed in the plant. A spillway with three vertical-lift, fixed-roller gates and one set of stop logs will be built adjacent to the powerhouse. The powerhouse will be flanked by two sections of dam — each about 15 meters high.

The plant has a 39-year power purchase agreement with Ontario’s Independent Electricity System Operator (IESO). IESO works with local stakeholders in each of Ontario’s 21 electricity regions to develop integrated solutions for maintaining a reliable supply of electricity, according to IESO.

Boralex is an independent power producer that develops, builds and operates renewable energy power facilities in Canada, France and the U.S., and 15% of its business includes hydropower.