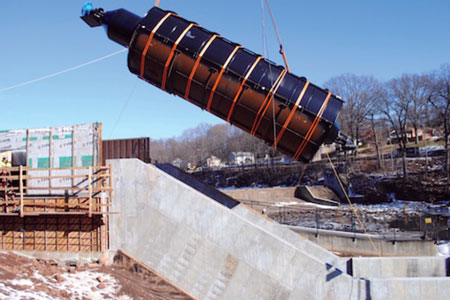 The New England Hydropower Company, LLC has commissioned what it says is the first generating station to be powered by an Archimedes screw turbine in the U.S. Located on an existing dam at Hanover Pond in Meriden, the project is expected to generate 920,000 kWh of electricity annually and will operate under a long-term power purchase agreement with the city.

Although a long-established technology elsewhere in the world, particularly in Europe, Archimedes screws have yet to gain a strong foothold in America.

“Our goal from the inception of the company was that success at Hanover Pond would lead the way to market acceptance of the Archimedes screw technology in the U.S.,” New England Hydropower Founder and Chief Executive Officer Michael Kerr said.

Pakistan’s Water and Power Development Authority has awarded a contract worth about US$13.48 million to a joint venture led by Turkey’s Dolsar to perform rehabilitation work at the 243-MW Warsak hydroelectric plant.

The work is being performed as part of WAPDA’s second round of rehabilitation at Warsak in an effort to stem the effects of aging electrical and mechanical equipment.

The agency said the plant’s cumulative capacity has already dipped to 193 MW, although modernizations performed through the second round of rehab will restore that power and extend its life up to 40 years.

Warsak was the first large-scale hydroelectric project constructed in Pakistan after the country gained its independence, with the first phase completed in 1961. A pair of generating units were added in 1981, increasing its capacity by 83 MW to its current capacity.

WAPDA took bids in April 2015 for a tendering agent for the Warsak rehabilitation. It also called for bids in March of that year to rehabilitate a turbine runner and wicket gates at Warsak. It took bids in 2014 to supply butterfly and gate valves for the project.

The California Department of Water Resources has awarded a contract worth $275,443,850 to Kiewit Infrastructure West Co. to perform repairs at Oroville Dam, according to a work order issued in April.

Per the agreement, Kiewit was to begin reconstruction on Oroville’s failed spillways immediately, with the goal for the system to be operational before the region’s wet winter season that traditionally begins in November.

“The complete recovery or replacement of the spillways will be done in multiple phases due to the enormity of the project and the time limitations of the construction season,” the agency said in a release, noting that preliminary work such as road construction and slope stabilization and other “no regrets” work has already begun.

California DWR had suspended flows over Oroville Dam’s main spillway in February as officials began investigating concrete erosion on its bottom half. The suspension of releases over the main spillway, coupled with heavy rain, led to releases from the dam’s auxiliary earthen spillway and the fear that a failure caused by further erosion could result in catastrophic damage downstream along the Feather River.

An 18-month-long upgrade of Ameren Missouri’s Bagnell Dam is under way. Ameren will perform the work in three stages – first installing 68 new post-tensioned anchors into the dam’s underlying bedrock, then placing concrete between piers that support a highway that runs over the dam, and, finally, installing a new concrete overlay to replace worn areas in the dam’s eastern and western sections. The utility expects to pour more than 66 million pounds of concrete.

“This is the largest, most visible project we’ve done at the dam in more than 30 years,” said Warren Witt, director of hydro operations at Ameren Missouri.

The $52 million project is not expected to hamper residential or recreational access to the Lake of the Ozarks, nor operations at the 242.59-MW Osage plant that is associated with Bagnell Dam. Lake levels are expected to remain the same through the summer.

“We scheduled all the work for weekdays, during daylight hours,” said Phil Thompson, manager of operations at Bagnell. “The dam is 87 years old and the work … will help ensure it is here for all of us to enjoy for years to come.”

The dam’s most recent major structural updates came in the early 1980s, when 277 post-tensioned anchors were installed. The structure is a 2,543 feet long and 148 feet tall. “Those post-tension anchors were the best technology at the time,” Witt said. “They have performed very well since they’ve been installed, and the dam remains structurally sound.”

The consent is mandatory for all offshore construction and equipment placement in UK waters and follows findings of an environmental impact assessment that showed effects on fisheries, marine mammals, archaeology, cultural heritage and navigation would not be significant.

“We are very pleased to have been awarded consent for our first installation in Holyhead Deep,” Minesto Chief Executive Officer Martin Edlund said. “It’s a great achievement by everyone involved in the application process, and yet another deliverable met as we move towards commercialization of our Deep Green power plant.”

Minesto said it expects to install a single unit at the site later this year.

The Swedish company already holds a lease agreement for a 10-MW installation at the site but announced in February it intends to scale it up to 80 MW.

Minesto has spent the past few years performing quarter-scale tests of its Deep Green generating units off the coast of Northern Ireland’s Strangford Lough while working to launch the Holyhead Deep site.

Reclamation facilities could be opened for non-federal pumped storage development

The U.S. House Committee on Natural Resources’ Subcommittee on Water, Power and Oceans held a legislative hearing in early April that could open some Bureau of Reclamation facilities up for non-federal pumped storage development.

Sec. 9(c)(1) of the Reclamation Project Act of 1939 allows for the development of small conduit hydropower by non-federal entities on some Reclamation properties. However, legislation introduced by subcommittee chair Doug Lamborn, R-Colo., would modify that by adding “and pumped storage hydropower development utilizing multiple Bureau of Reclamation reservoirs” to the act.

If approved, the Bureau of Reclamation Pumped Storage Hydropower Development Act – officially House Resolution 20 – would “stimulate non-federal pumped storage hydropower development in the 17 western states,” according to a subcommittee memo.

H.R. 20 would also help remove some of the ambiguity regarding federal oversight of potential pumped storage projects to be located on USBR facilities by clearly designating Reclamation as the lead agency.

“This hearing marks another step toward improving our nation’s infrastructure,” Lamborn said. “Today’s main focus is what we can do to empower regional, state and local leaders in developing hydropower at zero federal cost.”

Located on the Kennebec River, the pair of small hydropower plants had been used by Madison Paper to help power its operations from 1978 until it was shuttered last year.

Financial terms of the sale have not been disclosed, though assessments valued Anson and the downstream Abnaki at around $20 million and $35 million, respectively.

“Eagle Creek is very pleased to broaden our footprint in central Maine,” said Bud Cherry, chief executive officer of the New Jersey-based company. “The Madison Paper Industries portfolio represents an excellent opportunity to build out our operations in the region through the acquisition of a well-maintained, high-quality set of hydro facilities.”

Since its founding in 2010, Eagle Creek has acquired a portfolio of small hydro projects with a total capacity of about 180 MW.

The U.S. Department of Interior’s Bureau of Reclamation has released a draft environmental assessment and recently sought comments on proposed modernization and overhaul work on 18 generators at its 6,809-MW Grand Coulee hydro project.

The work is to take place on generators G1 through G18 in the left and right powerhouses. These 18 generating units have been in operation for more than 70 years and are experiencing mechanical problems from age-related wear and design.

Reclamation would upgrade components of the generating units, modernize three station service generators that also have been operating for more than 70 years, conduct maintenance of the penstocks, and update or replace the overhead cranes. Reclamation says the goal of the work is to provide reliable operations and electrical power generation for an additional 30 years.

India’s Ministry of Environment, Forest and Climate Change has awarded an environmental clearance for the 540-MW Kwar hydropower plant.

Kwar received the clearance on the recommendation of the environmental ministry’s expert appraisal committee earlier this month.

India’s Union Cabinet had approved an initial investment worth US$263 million for Kwar and the 600-MW Kiru project in September 2014.