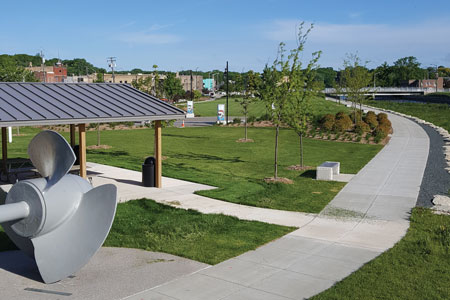 Redesigning the site of the 7-MW Badger hydro facility offered Kaukauna Utilities the opportunity to do something unique. The utility converted the site into a Hydro Park that attracts thousands of visitors for music, yoga, bicycle rides and more.

What do you do with the site of an old hydroelectric powerhouse that is sitting in the middle of a small but vibrant community? If you are Kaukauna Utilities, you turn it into an exciting new downtown park that offers a venue for music concerts, public meetings, recreation and much more. And to tie the park with the history of the site, you name it the Hydro Park.

The license authorized the city of Kaukauna to decommission the old Badger powerhouse and construct a new one, increasing the project’s installed capacity. Kaukauna Utilities chose this option for several reasons:

Kaukauna Utilities is a community owned and operated electric and water utility serving 15,000 customers. The company was founded in 1912 and owns and operates seven power generating facilities, including the Badger powerhouse. In total, 25% of the power the utility generates comes from hydroelectric plants. In fact, the company estimates that its use of hydroelectric power has saved its customers nearly $60 million over the past 10 years.

The company determined that the total cost of this recommendation would be $27 million. Of this, about $10.5 million would go toward repairing and upgrading the 130-year-old power canal. This option would only have a net 0.5% increased impact on projected rates by 2060, compared with 4.5% for repairing and then building a new plant in 20 years or 15% for retiring the plant and not building new hydro.

In May 2014, Kaukauna Utilities completed the overhaul of the Badger plant, combining the two old powerhouses into a single two-unit plant with a capacity of 7 MW. During the upgrade, both original plants were decommissioned and the new Badger powerhouse was demolished and replaced with the new structure. The old Badger site was then available to repurpose for alternate use: the Hydro Park.

Kaukauna Utilities worked with local engineering, planning and design firm GRAEF to create the park. The 5-acre park is located in downtown Kaukauna, Wis., on the Fox River, and features an old canal.

During development of the Hydro Park, GRAEF focused on maintaining the old canal on the river and ensuring park visitors could see how it used to function. “The goal was to make this a recreational and activity space and an amenity and feature that enhances downtown Kaukauna,” said Patrick Skalecki, project manager and principal for the GRAEF team.

The GRAEF team spoke with residents, city officials and Kaukauna Utilities employees to develop a plan to use the space.

The park contains information kiosks where visitors can learn about the city’s history of hydropower and the river. Two large plazas feature river stones that mimic the shape of the river, and granite planks provide information about the lock system and hydropower. The park also features a three-blade Kaplan turbine that had been rusting in the area in the 1970s.

In addition, the park has an outdoor performance area, gathering spaces, and trail connections. Events held at the park include the Live from Hydro Park series of free summer concerts, free yoga classes, benefit bicycle rides.

The park cost nearly $2 million and opened in October 2015. Since then it has hosted many gatherings and become a vibrant part of the landscape in downtown Kaukauna.

Mike Pedersen is manager, generation and operations with Kaukauna Utilities.