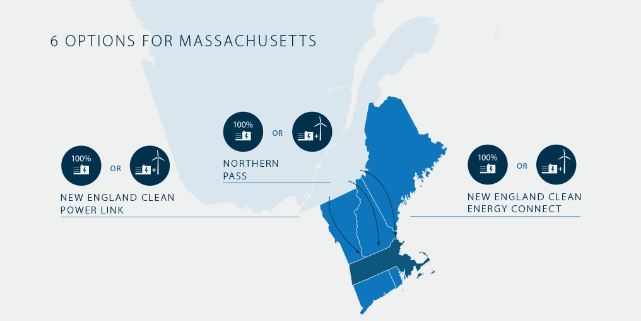 Central Maine Power has submitted several proposals for transmission line investments to deliver energy from hydro and other resources to the New England grid.

CMP took this action in response to the Massachusetts Request for Proposals for delivery of clean energy, according to a press release. This RFP comes less than a year after passage of An Act Relative to Energy Diversity in 2016, which is part of a broader effort to reduce the state’s energy costs, ensure a reliable electricity grid and meet long-term greenhouse gas reduction targets.

Among the proposed projects is construction of a new transmission line between Maine and the Canadian province of Quebec, which could provide $150 million in annual electricity cost savings through expanded access to “the vast hydro power resources of Hydro-Quebec,” CMP says.

The New England Clean Energy Connect, or NECEC, is a 320-kV HVDC transmission line between Hydro-Quebec and the New England grid. In Maine, the line will begin at the Canadian border in western Somerset County and run 145 miles to a new AC/DC converter station in Lewiston. The line will have the capacity to deliver up to 1,200 MW of power and is slated to become operational by 2022.

The proposed Maine Clean Power Connection, or MCPC, will provide a new 345-kV transmission connection from western Maine to the high-voltage New England grid. The line will begin at a new substation to be built in Skinner Township in western Somerset County near the Canadian border and run 140 miles to the company’s Larrabee Road substation in Lewiston. The new MCPC line will offer a range of capacity options from 460 MW to 1,100 MW to deliver energy, along with renewable energy credits and other environmental attributes, from varying combinations of wind, solar and storage facilities in eastern Canada and far western Maine. The MCPC is slated to become operational by 2022.

CMP says the NECEC offers state and regional benefits in the form of wholesale electric cost savings of $3.9 billion over the 20-year life of the project and $406 million annually in increased gross domestic product. In Maine, the benefit from NECEC includes providing average annual wholesale energy cost savings of more than $40 million per year for 20 years and reducing carbon emissions by an average of 285,000 metric tons annually.

“We’re pleased to offer Massachusetts a new choice of highly competitive, clean energy projects in full confidence that we can deliver tremendous value to consumers in the Commonwealth, Maine and other New England states,” said Sara J. Burns, president and chief executive officer of CMP. “The clean electricity options we offer are good for the environment and consumers. CMP has the advantage of owning all the transmission corridors to minimize distance to the market, development costs and impacts to communities and the environment.”

The MCPC line is projected to save New England customers $655 million to $1.45 billion over the 20-year life of the project.

On the other side of the border, Hydro-Quebec is proposing six options, either 100% hydropower or a hydro-wind power supply blend, to be delivered for the next 20 years. Hydro-Quebec announced it has partnered with three possible transmission projects to help meet Massachusetts’ energy needs: Northern Pass Transmission being developed by Eversource Energy, New England Clean Power Link being developed by Transmission Developers and CMP’s NECEC.