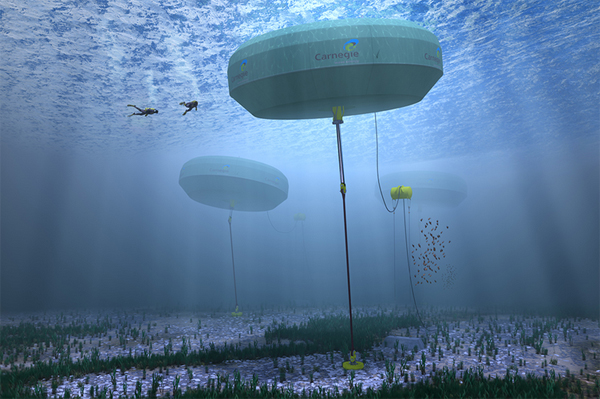 The Australian Renewable Energy Agency (ARENA) announced today that a project it helped fund at the Perth-based Carnegie Wave Energy Project in Australia completed 14,000 cumulative operating hours. ARENA said the amount of hours are the highest ever recorded for the global wave energy industry.

For the past 12 months, the CETO 5 project operated successfully at its Perth Wave Energy Project site off Garden Island, Western Australia.

The CETO 5 wave energy system consists of three 240-kW units that use buoyant actuators, each 11 m in diameter. The actuators are tethered to pumps on the seabed. As the actuators move up and down in the passing waves, the pumps send high-pressure water through a pipe to an onshore power station where generators produce electricity.

The record was set as the system used the ocean as a renewable energy source to provide electricity and potable desalinated water to Australia’s largest naval base, HMAS Stirling, on Garden Island.

Supported with $13.1 million of funding from ARENA, this now complete $40 million project was the first array of wave power generators to be connected to an electricity grid, worldwide.

ARENA Chief Operating Officer Ivor Frischknecht said the CETO 5 project is a prime example of how, with the right stewardship and support, improvements can be made on previous iterations of a technology, to progress it along the innovation chain towards commercialization.

TRL is an internationally accepted measurement system used to assess the maturity level of a developing technology.

ARENA said nearly 80% of Australia’s population lives on the coast and wave technology has the potential to not only be part of our future energy solutions in remote and on-grid communities, but an exportable global solution too.

Frischknecht also said the data generated and the lessons learned throughout the CETO 5 project will be shared with the renewable energy industry, helping other wave energy projects advance faster and overcome development hurdles.