With both faced symmetrical hardfill and concrete-faced rockfill dams being suitable for sites with poor foundations, the authors set out to determine unique characteristics of the two dams types. Their research revealed a smaller amount of deformation and lower costs for FSHDs.

The first and most important step in designing a new dam is determining an appropriate type of dam to build, based on the unique site conditions. The optimal design of the dam is determined after consideration of technical, economic, environmental and social factors.

For sites with poor foundations, trapezoid-shaped dams are good options because they typically have a much greater weight than conventional gravity dams and therefore do not require the high shear strength of bedrock to satisfy requirements for safety against sliding. Both faced symmetrical hardfill dams (FSHD) and concrete-faced rockfill dams (CFRD) have symmetrical trapezoid-shaped cross sections with an upstream concrete face slab that prevents water from penetrating into the dam body.

The results show that FSHD and CFRD are safe against applied loads, but the deformation obtained in FSHDs is smaller than that for CFRDs. Also, FSHDs are more economical to build than CFRDs for sites with high flooding in the river.

FSHD is a fairly new type of dam, first proposed in 1992,1,2 which is called CSG (cemented sand and gravel) in Japan. This type of dam is built using a low-cost cemented sand and gravel material known as hardfill. A FSHD has several advantages, including a high degree of safety, strong earthquake resistance, low demands for the foundation, simple and quick construction and minimal negative effects on the environment.

Because of its trapezoid shape, a hardfill dam has much greater weight and a longer length for shear resistance than does a conventional gravity dam (see Figure 1). It is said the high shear strength of the dam foundation is not required to satisfy safety requirements against sliding, meaning this type of dam can be constructed even on a poor foundation.3 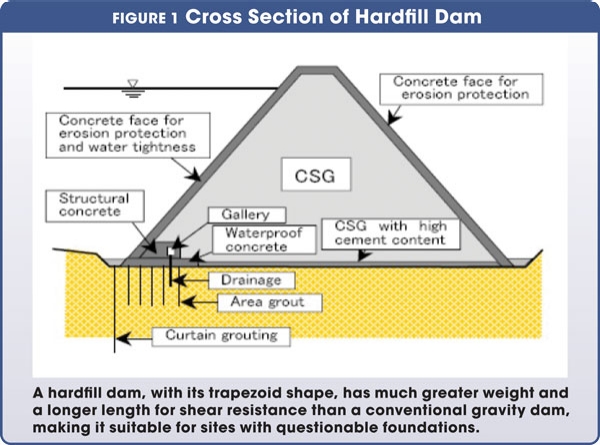 CFRDs are popular all over the world, especially in regions that receive heavy rain and where impervious clay is insufficient. CFRD has become popular over the past 40 years because of its good performance and low cost compared with rockfill dams with an inner earth core.

A chronicle of modern rockfill dam design, including a description of current practice in CFRD design, is available,4 as are explanations of the characteristics of rockfill behavior using specific CFRD cases.5,6 It is often necessary to rely on historic performance data from other dams to estimate dam properties. In recent years, a significant amount of research has been performed with regard to the properties, design, construction and behavior of CFRDs.

The authors performed finite element modeling of FSHDs and CFRDs to evaluate safety of both dam types against applied loads. To supply the general properties of the dam – geometry, material properties of the foundation, dam height and reservoir level – the authors chose a profile of the Kahir Dam site for both models (see Tables 1 and 2 for more information on the two dam types studied). 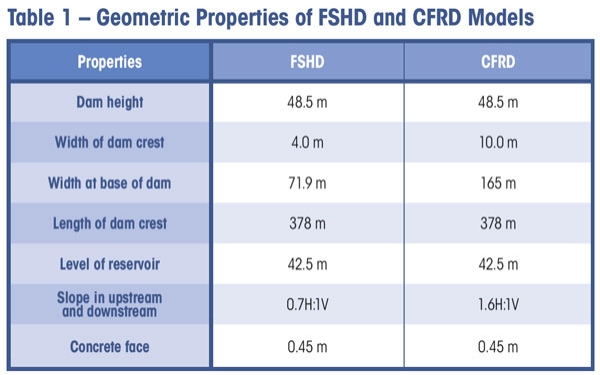 Kahir Dam, located on the Kahir River in southeastern Iran, will be the first FSHD constructed in the country, and this work is scheduled to begin in 2012. The dam is 68 meters high, with a width at the dam crest of 4 meters and width at the base of 71.9 meters. The upstream and downstream slope of this dam is 0.7H:1V. The river basin area at the Kahir Dam site is equal to 4,596 km2. And average annual rainfall in the basin is 150 mm.7

Loads applied in the static and dynamic analysis of the FEM models for both dam types are:

– Weight of the dam body;

– Hydrostatic pressure of the reservoir water on the upstream dam surface;

– Uplift pressure at the base of the dam;

– Inertia force of the dam body from upstream to downstream (dynamic load); and

– Hydrodynamic pressure on the upstream side of the dam.

The earthquake coefficient for both dams was considered to be 0.15.

Technical evaluation of FSHD and CFRD

The maximum deformations in the dam body and concrete face under dynamic loads for a FSHD are much smaller compared with the CFRD: the maximum horizontal and vertical deformations are 1:11 and 1:14. In this condition, the facing safety for a FSHD is better than that for a CFRD.

Table 3 shows the principle stress and safety factor for a FSHD. Safety factors for stress distribution in the body of a FSHD for the static and dynamic load cases are considered to be 3 and 1.5, respectively.10 Tensile and compressive stresses in the dam body are much less than allowable stresses. As a result, the dam is in the safe condition. Also, for construction of a FSHD, hardfill materials with low cement strength can be used.

The formula for the local safety factor against sliding at the base of the dam is:3

– Ïƒ is normal stress in the vertical direction at the base of the dam;

– f is friction against shearing;

– c is cohesion against shearing;

– A is the width of the dam base; and

– Ï„ is shear stress at the base of the dam.

Economical evaluation of FSHD and CFRD

In this section, FSHDs and CFRDs are evaluated economically. For this purpose, both of the FEM models in the previous section were considered as sample cases for economic evaluation.

From an executive point of view, the six most important aspects of dam construction are:

– Excavation of foundation and abutment of the dam and modification as needed;

– Construction of spillway; and

With the dam site for both FSHD and CFRD being essentially the same, the executive items and associated costs are equal. The second and third items are the same for both dam types.

Design of a water diversion system for rockfill and earth dams is based on the seven- to 10-year flood return periods, whereas roller-compacted-concrete (RCC) dams are based on three- to five-year flood periods. This is because the construction period for rockfill dams is longer than for RCC dams. Thus, the cost of a water diversion system for CFRD is more than for FSHD.

Costs for excavation of the foundation and abutment and construction of a cutoff wall are considered identical.

FSHDs and CFRDs were evaluated technically and economically and compared with each other. Based on the above technical and economical evaluation, the authors have drawn the following conclusions:

– FSHD, a new type of RCC dam with a shape between a gravity dam and CFRD, has good quality and some unique advantages such as high safety, strong earthquake resistance, low demands for foundation, simple and quick construction, low cast and small negative effects on the environment.

– CFRD has a symmetrical trapezoid-shaped cross section with a concrete face slab on the upstream side that prevents water penetration into the dam body. This type of dam is suitable for sites with alluvial foundation and gravel materials and especially in regions that receive heavy rain and where impervious clay is insufficient.

– Results show that deformations at the dam body and concrete face of FSHDs are smaller than deformations for CFRDs.

– The maximum horizontal and vertical deformations at FSHD dam body are 1:11 and 1:14, respectively.

– Results obtained from the analysis show that tensile and compressive stresses in the bodies of both dam types are much less than allowable stresses, and both of the dam types are in the safe condition.

– Hardfill materials with low cement and lower strength can be used for the construction of FSHD.

– Construction of FSHD on sites located on seasonal rivers with high floods is a better option than CFRD because during unexpected seasonal floods, FSHD has a greater safety factor than CFRD.