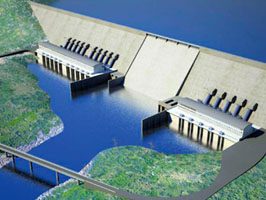 The BRL Group of France has won a contract to study the social and environmental impacts of the 6,000-MW Grand Renaissance Dam under construction on the Blue Nile River in Ethiopia.

The contract is worth €4.5 million (US$5 million), according to a press release, and was signed with the water ministers of Sudan, Egypt and Ethiopia.

Grand Renaissance Dam is anticipated to cost about $5 billion to build and is designed to impound water for the largest hydroelectric plant in Africa. The dam will be able to store more than 70 billion cubic meters of water and is located 40 kilometers from the Sudan border.

The downstream states, particularly Egypt, have expressed concern that they will suffer water shortages as the reservoir for the project is filled. The Blue Nile accounts for 85% of the Nile River’s flow.

BRL studies will include: modeling of water from the Blue Nile and the Nile and the effect on downstream resources and studies of the impact of the work on environment and activities (such as irrigation and fisheries). Studies will last 11 months and start as early as November 2016.

BRL will perform 70% of the work required, with the balance being awarded to French consulting firm Artelia.

Two powerhouses located at the toe of the main dam will house 16 Francis turbine-generator units at 375 MW each, and total annual output is expected to be 15 TWh.

The U.S. Department of Interior’s Bureau of Reclamation conceived the water resources development plan in the 1960s.