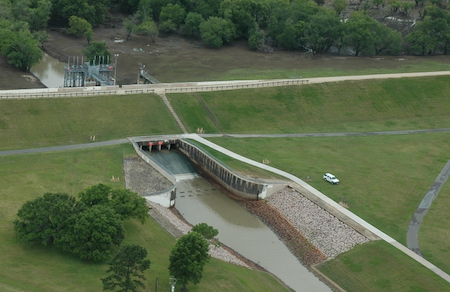 A federal project to fix the Addicks and Barker dam gates located in Houston, Texas, is in progress and will cost about US$75 million.

The U.S. Army Corps of Engineers awarded contracts to repair Addicks and Barker dams after inspections in 2015 at the facility, upstream of the Houston metropolitan area, revealed two structural areas of concern: The gates in the dams that allow outflow to Buffalo Bayou, and the ends of the dams.

Published reports indicate work began at the end of February and repairs are slated for completion by 2019.

According to the Corps, due to the risks associated with these two concerns combined with potential consequences to Houston should there be a failure, Addicks and Barker were designated as “extremely high risk.”

Addicks and Barker dams form reservoirs that are dry much of the time, according to the Corps, and are not in imminent danger of failing. However, after being designated “extremely high risk,” all actions for the facilities are being expedited, including being moved up to the front of the line to receive funding for repairs and studies.

Addicks Reservoir and Addicks Dam, in conjunction with Barker Reservoir, prevent downstream flooding of Buffalo Bayou in Houston. Both reservoirs were authorized under the Rivers and Harbors Act of June 20, 1938.

They are continuously monitored by a full-time staff to ensure their structural integrity. But, the primary concern is the fact that the Houston metropolitan area is the nation’s fourth largest population center. Any dam safety issues at Addicks and Barker could have a far greater impact due to the magnitude of people and property downstream.