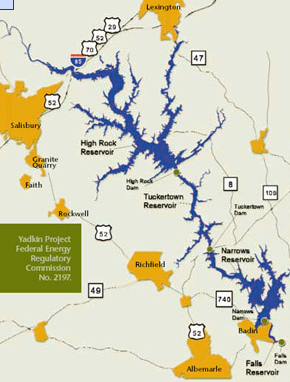 Cube Hydro Carolinas LLC has closed its deal with Alcoa Corp. to take ownership of four hydroelectric plants along the Yadkin River in North Carolina.

The four facilities are High Rock, Tuckertown, Narrows and Falls and have a total capacity of 215 MW, Cube Hydro says. The financial value of the transaction was not disclosed.

“We are excited to officially take ownership of the Yadkin Project,” said Dr. Kristina M. Johnson, chief executive officer of Cube Hydro Partners (parent company of Cube Hydro Carolinas). “We look forward to partnering with local leaders surrounding the Yadkin River to innovate and produce economic, environmental and social benefits for our new neighbors who live and work here.”

Cube Hydro is a hydropower development and operating platform targeting investments in mid-sized hydro projects in the U.S. and Canada, according to a press release.

The Federal Energy Regulatory Commission approved the sale Sept. 30, 2016, shortly after it awarded a new 40-year operating license for the Yadkin River projects.

The facilities had been used to feed an Alcoa-owned aluminum smelting complex until the company closed it in 2007. At that time, Alcoa began selling the electricity generating by the facilities.