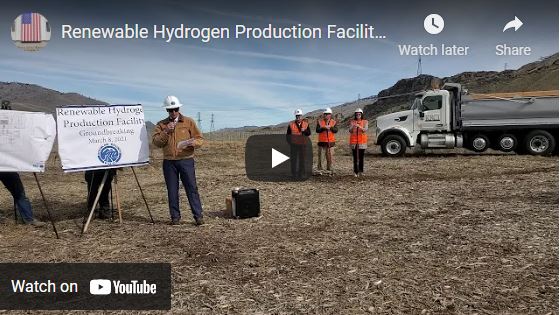 Douglas PUD says generation requests can be sent to the hydrogen electrolyzer to reduce the mechanical adjustments necessary at the Wells Hydroelectric Project on the Columbia River to balance the grid. This will reduce the maintenance necessary on the turbine units and associated equipment.

Hydrogen is created by a process that separates the hydrogen and oxygen molecules in water through electrolysis. The process is energy intensive, with about 80% of the input costs being electricity.

“Douglas PUD has always been an innovator in the utility industry. As the state looks toward low and zero emission technologies, our customer-owners want their local PUD to be prepared for the future,” said Douglas PUD General Manager Gary Ivory.

This project has been in the works for several years, with the first hurdle cleared with the passage of SB 5588 in 2019, authorizing PUDs to produce and sell renewable hydrogen (sponsored by Senator Hawkins) and a $250,000 planning grant sponsored by Representative Steele.

Douglas PUD anticipates delivery of the electrolyzer in July. Connections of piping, electrical and water will follow, with production of renewable hydrogen starting late this year.