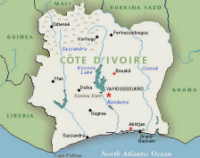 The Emerging Africa Infrastructure Fund (EAIF) is lending €25 million (US$29.6 million) over 18 years to Ivoire Hydro Energy (IHE), which will build the 44-MW Singrobo hydroelectric generation plant on the Bandama River in Cà´te d’Ivoire.

EAIF is a Private Infrastructure Development Group (PIDG) company. Financial close is expected late in the third quarter of 2021. The €174 million (US$205.7 million) project is forecast to take 36 months to build.

Under a long-term power purchase agreement, all of the energy produced by the Singrobo plant will be sold to Compagnie Ivoirienne d’Electricité, operator of Cà´te d’Ivoire’s national grid. The new plant will be an important strategic economic asset, adding to the country’s generation capacity, and enhancing the system’s flexibility, meaning it may be called in to meet baseload demand as well as peak demand.

The African Development Bank (AfDB) acted as the mandated lead arranger of the debt finance and will be a senior lender in its own right. In addition to AfDB and EAIF, the other lenders are the German international development agency (DEG) and the Africa Finance Corporation (AFC). A quarter of the project cost is funded by equity from the project’s shareholders, IHE Holding, the Africa Finance Corporation and DIPFA, a Denham Capital-owned international investment platform for power projects. Neo Themis SARL is advising and acting for the shareholders in relation to finalizing the project’s development and the financing agreements.

Electrification rates in Cà´te d’Ivoire range from about 88% in urban areas to as low as 31% in rural parts of the country.

The project site is located 23 km downstream of the existing Taabo Dam and upstream of the confluence of the Nzi River. It is 3.5 km from Singrobo village in the province of Taabo and 148 km by road from Cà´te d’Ivoire’s capital city, Abidjan. The main plant infrastructure consists of:

Ninety One is a third-party investor in private equity, credit, public equity and sovereign debt across the African continent. EAIF is managed by and fully integrated into Ninety One’s African investment platform. Since May 2016, Ninety One and its EAIF team have closed over 20 infrastructure transactions with a capital value of US$650 million.