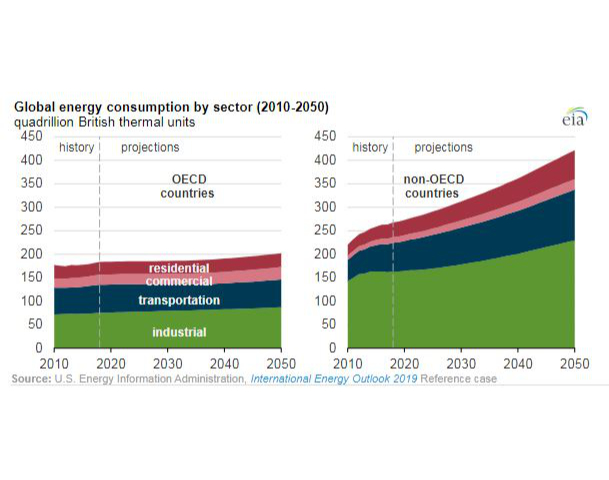 World energy consumption will grow by nearly 50% between 2018 and 2050, according to information recently released by the U.S. Energy Information Administration.

In its International Energy Outlook 2019 (IEO2019) Reference case, EIA projects this stunning increase in consumption and says that most of this growth comes from countries that are not in the Organization for Economic Cooperation and Development (OECD). In fact, this growth is focused in regions where strong economic growth is driving demand, particularly in Asia.

EIA’s IEO2019 assesses long-term energy markets for 16 regions of the world, divided according to OECD and non-OECD membership. Projections for the U.S. in IEO2019 are consistent with those released in the Annual Energy Outlook 2019.

Energy consumed in the buildings sector, which includes residential and commercial structures, increases by 65% between 2018 and 2050, from 91 quadrillion to 139 quadrillion Btu. Rising income, urbanization, and increased access to electricity lead to rising demand for energy.

The growth in end-use consumption results in electricity generation increasing 79% between 2018 and 2050. Electricity use grows in the residential sector as rising population and standards of living in non-OECD countries increase the demand for appliances and personal equipment. Electricity use also increases in the transportation sector as plug-in electric vehicles enter the fleet and electricity use for rail expands.

With the rapid growth of electricity generation, renewables–including solar, wind and hydroelectric power–are the fastest-growing energy source between 2018 and 2050, surpassing petroleum and other liquids to become the most-used energy source in the Reference case. Worldwide renewable energy consumption increases by 3.1% per year between 2018 and 2050, compared with 0.6% annual growth in petroleum and other liquids, 0.4% growth in coal, and 1.1% annual growth in natural gas consumption.