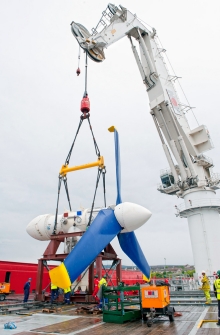 Tidal energy developer Atlantis Resources Ltd. has entered into a partnership agreement with infrastructure developer, investor and fund manager Equitix worth at least US$714 million.

The agreement will help advance Atlantis’ portfolio of marine energy projects in Scotland, which, according to the company, have a total potential capacity of about 650 MW.

“This agreement with Equitix, a leading infrastructure investment specialist, is an important step for us in engaging a partner with both vital experience of large infrastructure projects and access to extensive capital, coupled with a desire to work with us to accelerate the further development of the United Kingdom’s tidal power industry,” Atlantis CEO Tim Cornelius said.

The investments will be spread made through at least the next two years, with nearly $73 million already committed by Equitix toward construction of the MeyGen tidal array’s first phase.

“We are delighted to be entering into this partnership agreement with Atlantis, the clear market leader in the tidal energy industry which secures access to a pipeline of primary investment opportunities and has tremendous growth potential in the UK,” Equitix chief operating officer and founding director Nick Parker said.

The investments — made through a combination of debt, equity and grants — will give London-based Equitix a minimum 25% share in each of Atlantis’ projects.

MeyGen, located in Scotland’s Pentland Firth, could ultimately have a cumulative output capacity of nearly 400 MW. Atlantis Resources said in December that its first units should be connected to the grid by the end of this year.

HydroWorld.com reported in March that Atlantis had returned two lease agreements to the Crown Estate for other marine hydrokinetic projects that would have been located in Wales and Scotland.