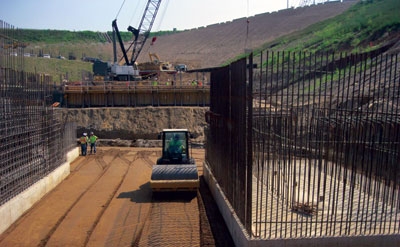 Fitch Ratings on Nov. 21 said it has affirmed the ‘A’ rating on bonds that support three American Municipal Power Inc. (AMP) hydroelectric projects on the Ohio River.

The Rating Outlook is Stable, Fitch noted. The bonds are secured by the trust estate, which will include all gross receipts (primarily payments made by the participants under power sales contracts), as well as other rights under the power sales contracts and transactional documents. The pledge of gross receipts will be subject to the prior payment of operating and fuel expenses.

This project consists of three separate run-of-the-river hydroelectric facilities aggregating 208 MW. Once complete, they are expected to provide power supply that is expensive ($114/MWh) over the near term, but environmentally-friendly, in a region dominated by fossil-fuel-fired generation. The longer-term economics of these projects are considerably more favorable.

Take-or-pay power sales contracts obligate the 79 participating municipally-owned electric systems to pay for their respective shares of all project costs, including debt service debt service on the bonds, whether or not the project is completed, operating or operable. All of the participating systems are members of AMP.

Project construction continues to progress, but commercial operation has been pushed back further to the 2015/2016 timeframe. Favorably, aggressive bidding on several original construction contracts resulted in lower costs and additional contingencies totaling $71m as of December 2013, which are available to offset future cost overruns or reduce outstanding debt.

AMP is a nonprofit wholesale power supplier and services provider that was organized in 1971 for the benefit of its members. At December 2013, AMP reported 129 members located throughout seven states (Delaware, Ohio, Kentucky, Pennsylvania, Michigan, Virginia and West Virginia). Together, the AMP members serve approximately 625,000 retail electric customers.

AMP is pursuing a portfolio of diverse power supply resources that includes coal-fired generation, hydroelectric generation, natural gas, wind, solar and landfill gas power projects, and is designed to meet the growing energy requirements of its members. AMP is developing its newest resources as separate and distinct projects consistent with its traditional resource strategy.

The three new hydro facilities on the Ohio River are the Cannelton, Smithland and Willow Island. Each individual project will utilize substantially the same design elements and will entail the diversion of water from an existing Army Corps of Engineers dam through bulb turbines to generate electricity.

Delays related to concrete pouring, ground improvements, and certain actions by the Corps of Engineers have pushed the estimated completion dates at Cannelton and Smithland back by several months, whereas the absence of certain anticipated ground improvements has accelerated the completion of Willow Island, which remains on target for completion during the second quarter of 2015. The first unit at Cannelton is expected to come on line around the same time as Willow Island, approximately one year later than anticipated. Commercial operation at Smithland has been delayed the furthest to the second quarter of 2016.

The total budgeted cost of project construction remains approximately $2.04bn, which at $9,835/kW is very high compared to natural gas-fired and even coal-fired units, but generally in-line with hydroelectric construction. Favorably, more aggressive bidding has resulted in the awarding of several contracts at prices below original budget estimates, Fitch noted.