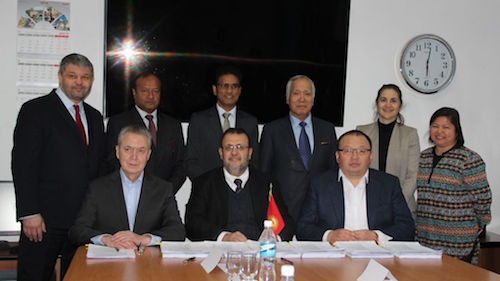 A joint venture of GE Hydro and GE Renewables was awarded a turnkey contract for the modernization of Kyrgyzstan’s Toktogul project.

The US$104 million deal, offered by the state-owned JSC Electric Power Plants, will further expand Toktogul’s output capacity from 1,200 MW to about 1,440 MW.

The facility is located on the Naryn River near Jalal-Abad and is Kyrgyzstan’s largest and oldest, having come on line more than 40 years ago. Since then, the project’s aging has caused a decrease in its production, prompting the Asian Development Bank and Eurasian Development Bank to help undertake a rehabilitation that began in 2012. The plant once supplied about 70% of the country’s electricity, but now accounts for only about 40%.

“The phased rehabilitation of the Toktogul plant has been the key priority for ADB’s energy sector support in the Kurgyz Republic, and its timely rehabilitation is key to the country’s plan to export summer surplus to Afghanistan and Pakistan,” said Ashok Bhargava, Director for the Energy Division at ADB’s Central and West Asia Department.

The first new GE-manufactured turbine is scheduled for commissioning in November 2020, with an additional unit to follow each year through 2023.

Kyrgyzstan could be ripe for hydroelectric development — though finding backers to exploit its resources has not always been easy.

The country’s parliament backed out of a deal with Russia  in January 2016 that would have included the construction of five hydropower projects. Had they been built, the plants would have had a cumulative output capacity of over 2 GW.

The Kyrgyz Ministry of Energy and Industry also announced a plan to construct several dozen small hydro plants in April 2015 — largely in response to declining output from Toktogul.