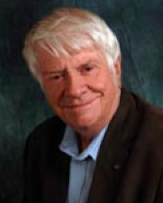 Late last month, George A. (Sandy) Thomson, owner and chairman of the Board of Thomson-Gordon Group, the parent of Ontario, Canada-based Thordon Bearings Inc., was elected a Fellow by the Society of Naval Architects and Marine Engineers (SNAME).

According to SNAME, the grade of Fellow is accorded exclusively to “individuals who have made outstanding personal contributions to naval architecture, marine or ocean engineering, or allied disciplines through significant achievements in design, research, production, operation, education or associated management.”

For the past 40 years, Thomson has led Thordon Bearings and been a guiding force in its manufacture of zero pollution high performance bearing systems used in the hydropower industry. The products are used for main shaft guides, wicket gates, linkage, operating mechanism and pump bearings, and segmented shaft seals, according to the company.

Thomson attended Northrup University in California where he earned a Mechanical Engineering degree. In 1965 he moved to Canada and began to work in his family’s business, which at that time distributed engineering supplies.

According to the company, Thomson redirected his family’s business to manufacturing propeller shaft and rudder bearings, leading to the development of Thordon Bearings.