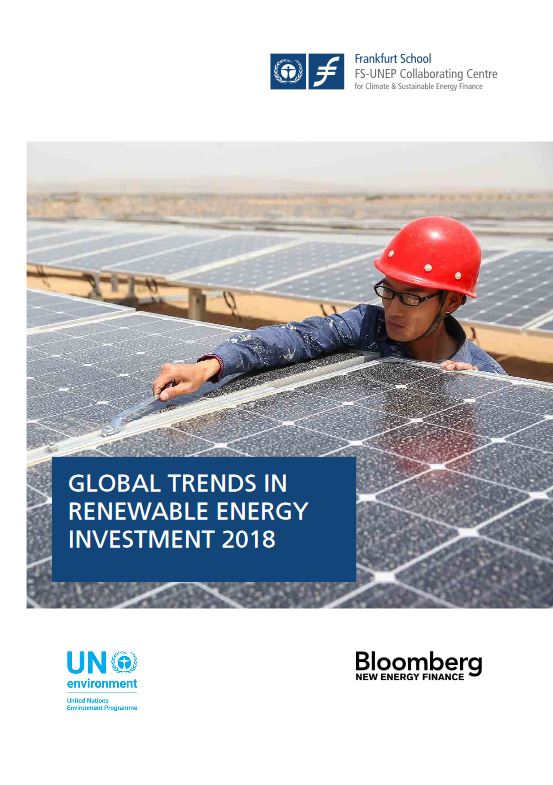 Since 2004, the world has invested $2.9 trillion in green energy sources, including small hydro, according to the Global Trends in Renewable Energy Investment 2018 report. Last year was the eighth year in a row that global investment in renewables exceeded $200 billion, the report says.

The definition of renewable energy in the report includes: all biomass and waste-to-energy, geothermal, and wind generation projects of more than 1 MW; all hydropower projects of between 1 MW and 50 MW; all save and tidal energy projects; all biofuel projects with a capacity of 1 million L or more per year; and all solar projects (with those less than 1 MW estimated separately and referred to as small-scale projects or small distributed capacity).

Renewable energy made up a record 61% of all the net power generation capacity added worldwide in 2017. A record of 157 GW of renewable power were commissioned in 2017, “far outstripping the 70 GW of net fossil fuel generating capacity added last year.” While much of the growth “can be attributed to falling costs for solar electricity, and to some extent wind power, which continues to drive deployment,” the report says small hydro capacity added last year was just under 3 GW.

The report does say that large hydroelectric projects (more than 50 MW) secured an estimated $45 billion of final investment decisions in 2016, up 108% year-on-year. But global large hydro investment in 2017 was a bit less than half the value of the capacity investment announced for wind last year, and between a third and quarter that for solar.

In terms of acquisition activity, the value of acquisition transactions in renewable energy was $114 billion in 2017, with small hydro accounting for just $500 million, falling 26% from 2016.

What is the take-home message for global renewables? “More electricity generated by renewable sources in 2017 signals strong commitment to addressing climate change and reducing carbon emissions,” the foreword says. “While there is much to be positive about, it is also evident that we need to continue to push the acceleration of the global renewable energy revolution. Last year was the second hottest on record and carbon dioxide levels continue to rise. In electricity generation, new renewables still have a long way to go.” The report says the proportion of world electricity generated by renewable sources reached 12.1% in 2017, up from 11% in 2016.

The report was developed by the Frankfurt School-UNEP Centre and Bloomberg New Energy Finance. Most of the data in this report comes from Bloomberg’s online database of investors, projects and transactions in clean energy.