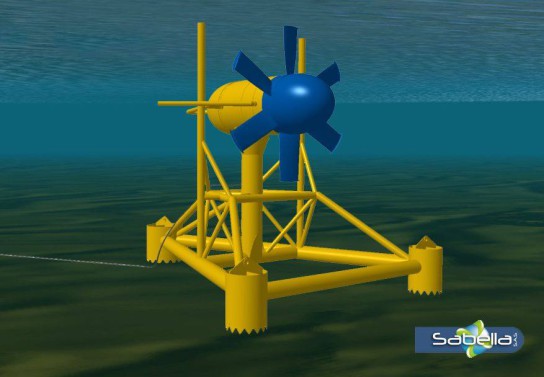 French news agencies are reporting that in October 2015, for a period of two weeks, a 1-MW Sabella D10 tidal turbine being tested in Fromveur Passage, off Ushant Island in France, was rendered inoperable after hackers encrypted the computer managing the unit’s satellite connection.

“We lost the computer that allowed satellite connection from Quimper to the control unit of the tidal turbine,” said Jean-Francois Daviau, president of Sabella SAS, the company that built and is testing the device.

Sabella is based out of Quimper, on the northwestern-most tip of France, about 90 miles southeast of the site.

The Sabella D10 was submerged 2 km off of the southern coast of Ushant on June 5, 2015, at a depth of 55 m. The attack happened only days before the unit was scheduled to connect to the island’s power grid, so there was no interruption of power.

The estimated cost of the project is about US$20 million and is expected to cover 15% to 20% of the power needs for Ushant Island.

The unit is as tall as a five-story building and in order to regain control of the turbine, the hackers offered to send Sabella a password that would unlock the encryption, but only if the company paid a US$4,000 ransom.

“We decided to refuse,” said Sabella Project Manager, Jean-Christophe Allo, according to several published reports. “We changed the computer and reinforced its security.”

He also said it took the company about two weeks to completely recover, and the attack did not damage the turbine.

The company said the unit began generating limited amounts of power to the grid for Ushant’s inhabitants on Nov. 5, 2015. Sabella plans to place additional turbines in the Fromveur Passage to power Ushant in 2018-19. The plan calls for the deployment of up to three 2-MW Sabella D15 tidal turbines, each one 15 m in diameter.

Also during October 2015, Sabella and Filipino developer H&WB Asia Pacific signed a memorandum of agreement to establish a 5 MW tidal power project in the Philippines. The pilot project is planned for the San Bernardino Strait near Matnog, and the generated power will be supplied to the Sorgoson Electric Cooperative I and II.

The plant is a proof-of-concept project and a first for the Philippines, according to the developers, who also hold additional rights to ocean energy service contracts in the San Bernardino, Santa Ana and Capul regions.