Analysis performed by the U.S. Army Corps of Engineers revealed that simply changing the way it adjusts the cam plate at one 100-MW hydro plant could avoid economic losses of as much as $1 million.

Mechanical governors require cam plate adjustment to deal with head fluctuations. Inefficiency results if the cam plates are not adjusted over different heads. To quantify the economic impacts of not adjusting the cams, the 100-MW Old Hickory Power Plant was selected as a case study. Model test information was used to develop efficiency loss curves based on three scenarios:

– Cam left at the head in the middle of the head range;

– Cam left at the average operating head; and

– Cam adjusted after the head crosses the threshold for adjustment.

Operational data was examined, analyzed and modeled. Results of the case study can be used to quantify the costs associated with governor cam adjustments.

Old Hickory, on the Cumberland River in Tennessee, U.S., was selected because there was data readily available and a model test that was appropriate. The U.S. Army Corps of Engineers put the four vertical-shaft Kaplan (adjustable blade) turbines into service in the 1950s. The five-blade Baldwin Locomotive Works turbines have a discharge diameter of 264 inches, and rated output is 44,000 hp at 44 feet of net head. There are 24 wicket gates with a maximum wicket gate vent opening of 28 inches.

The mechanical Old Hickory governors, manufactured by Woodward, use one cam plate that should be rotated for different heads. Old Hickory spans a 30-foot head range with the cam plate scribed for 36 feet, 45 feet, 52 feet and 60 feet. This means manual adjustment of the governor would be required if the head crosses 40.5 feet, 48.5 feet and 56 feet.

Hourly data from May 1986 to December 2006 was evaluated as part of this effort, including head, powerhouse flows and plant power.

Operational data was evaluated on a per-unit basis to determine the frequency of operation based on power and head. Figure 1 details the frequency of operation at a given head and power setpoint. In addition, the hill chart depicting lines of constant efficiency are plotted over the head range. In essence, this is a three-dimensional histogram. There are two three-dimensional graphs, showing most frequent operation as well as peak efficiency.

To capture the head variation per day, the data was examined to see how frequently the cams need adjusting. This analysis relied on determining how frequently halfway between each scribe line was crossed (40.5 feet, 48 feet and 52 feet). Results showed that, on average, the cam plates would need to be adjusted to a new scribe line 1.3 times per day with an average daily head variation of 4.3 feet.

However, head variation data for October 2001 (month and year randomly selected) showed there are frequent head fluctuations exceeding 5 feet daily. Cams are scribed at 52 feet and 60 feet, so adjustments would be required when the head crosses 56 feet, which occurred nearly every day that month. 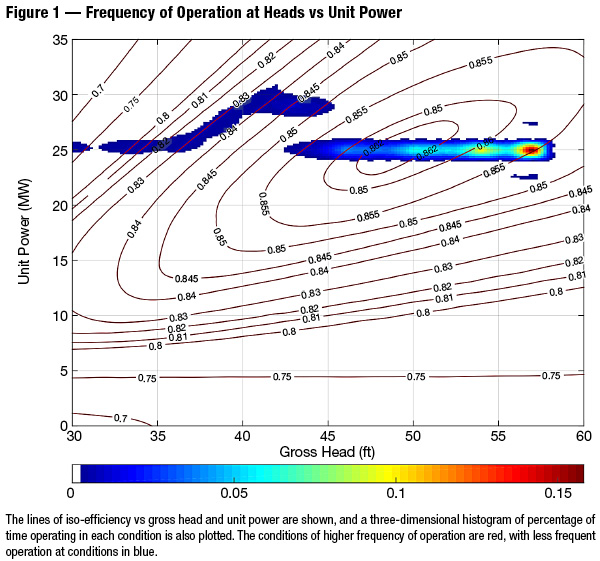 To try and quantify the impacts of the head errors, three scenarios were examined:

1. Cam near rated head (44 feet). This scenario would be about mid-span of the head range and a likely scenario for cam placement

3. Cam adjusted between scribe lines. This would attempt to capture if the cams were frequently adjusted to minimize head losses.

It was assumed the cam plate was left on 44 feet for the entire operating timeframe. This setting was selected because not only is 44 feet rated head, but it also was conveniently the middle of the head range (30 feet to 60 feet). This scenario would have no efficiency loss at 44 feet of head over the full range of power outputs. As the head increases or decreases away from 44 feet, an efficiency loss is incurred due to operation at less than ideal blade angle.

The resulting head loss curve was then plotted on top of the data from operation, yielding Figure 2. 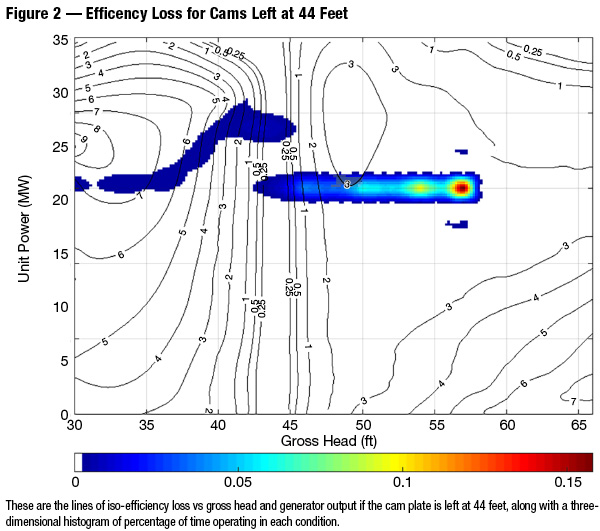 Scenario 2 — Cam at head of most frequent operation (57 feet)

It was assumed the cam plate was adjusted to the head of most frequent operation and left there for the entire timeframe. The head at which most operation takes place is 57 feet. This scenario would have no efficiency loss at 57 feet of head.

The resulting head loss curve was then plotted on top of the data from operation, yielding Figure 3. 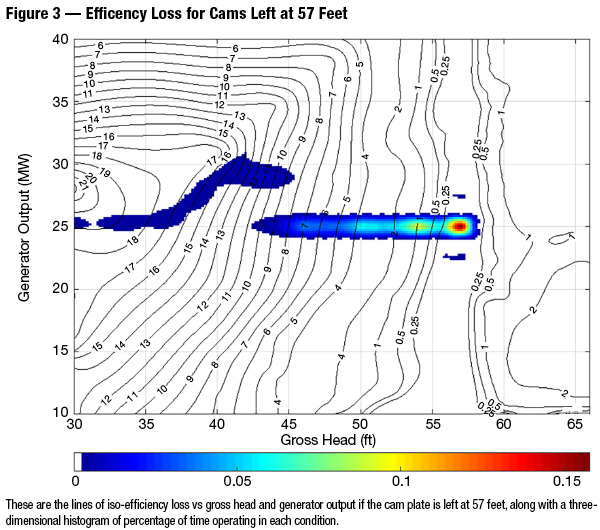 It was assumed the head variation past midway between scribe lines on the cam plates would require plant personnel to adjust the cam plates to the nearest scribed head. This scenario would have no efficiency loss at 36 feet, 45 feet, 52 feet and 60 feet.

The resulting head loss curve was then plotted on top of the data from operation, yielding Figure 4. 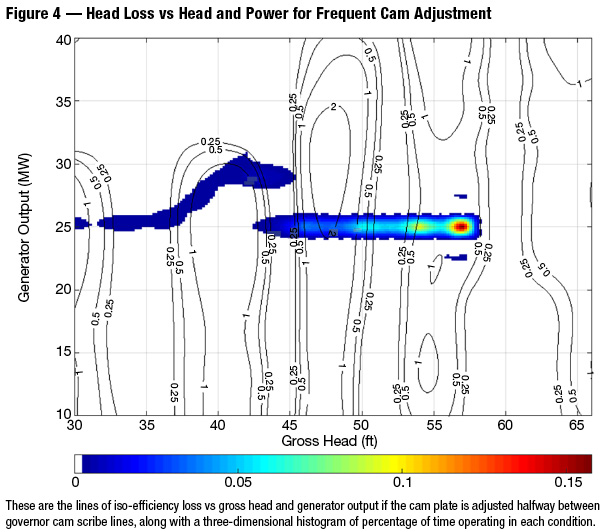 Use of loss curves

The loss curves developed for each condition were subtracted from the original hill curve to represent operation with a head error.

To calculate the cost, a standardized unit dispatch assumption across all the governor cam adjustments alternatives is required. A mathematical optimization model was employed using the Shuffled Complex Evolution Turbine Optimization Model (SCE-TOM) algorithm to rerun the current conditions of Old Hickory with different efficiency curves that incorporate the head error inefficiencies.1 This model has been validated on many USACE screening level turbine uprate studies.

Figure 5 illustrates a model validation of the SCE-TOM on historic Old Hickory operations for the year. The output of the mathematical model compares closely with the output from the historical data. The minor deviations are that operation in the low heads is often done without optimizing efficiency in mind, meaning capturing as much water through the turbines as possible. 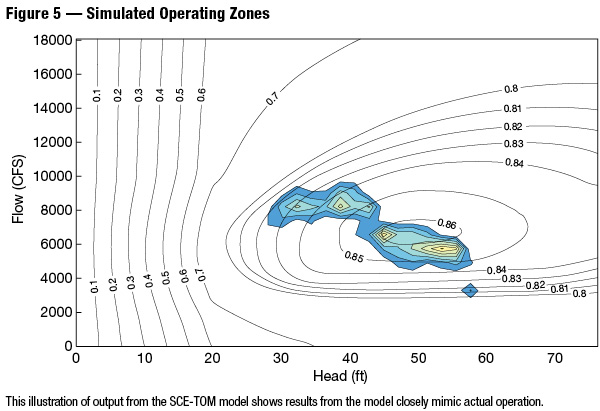 Energy benefits are calculated from an increase in generation (MWh) throughout the year. The value of this increase follows the seasonal variation in availability and demand reflected in regional energy prices. The value of this generation also follows changing demand throughout the day. To properly quantify these benefits, procedures for estimating seasonal hourly energy prices and variations in operation are developed using historic wholesale locational marginal pricing from four utilities in the Southeastern Electric Reliability Council Central Subregion: Tennessee Valley Authority, Big Rivers Electric Corporation, East Kentucky Power Cooperative, and Associated Electric Cooperative.

The economic loss resulting from leaving the cam on one head for the entire year will vary based on which head the cam was left on. The two scenarios studied yielded annual economic losses of $525,000 to $1,060,000 (see Table 1).

If the cams are adjusted perfectly between scribe lines on the cam plate, the resulting economic loss would be $175,000 per year. Based on this analysis, this would require the cams to be adjusted 1.3 times per day, as the daily head variation averages 4.3 feet.

It should be noted that the ideal operation is not considered to be probable, as head variations exceeding thresholds likely occur at all hours, including nights and weekends when project personnel are less likely to be available. Should the cams not be adjusted perfectly, the economic losses will tend toward the results of the cam plate left on a specific head.