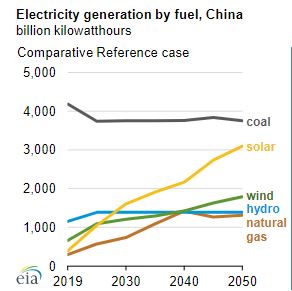 Although coal and natural gas will generally remain the primary fuels used for electricity generation in China and other Asian countries that are not part of the Organization for Economic Cooperation and Development (OECD), lower renewable cost cases project that renewables (wind, solar and hydroelectric) will become significant sources of generation by 2050.

This is the result of analysis by the U.S. Energy Information Administration (EIA). In the International Energy Outlook (IEO) 2020, EIA projects that electricity generation in Asia will more than double between 2019 and 2050. EIA analyzed the impacts of changing the price of natural gas and the capital costs associated with adding renewable energy power plants on the future electricity generation mix in China and other non-OECD Asian countries.

In the Low Natural Gas Price case, EIA assumed that natural gas fuel prices would decline by 50% each year through 2050. This assumption resulted in natural gas becoming the primary fuel for electricity generation in Other Non-OECD Asia in the future. Conversely, increasing natural gas fuel prices, combined with lower renewable capital costs, resulted in a higher combined share of generation from solar, wind and hydro technologies, which increase up to 61% by 2050. This share is more than double the Comparative Reference case share of 29%.