The Hydro Hall of Fame recognizes extraordinary achievement, with an emphasis on long-lasting facilities. Since 1995, 38 plants in the U.S. and Canada have received this award. The pictures on the following pages show some of the unique features of the facilities.

Hydropower is often described using the following adjectives: clean, renewable, sustainable, affordable. These are all fitting and do indeed capture the enduring value of hydro in the global energy mix.

Facilities that produce electricity from the power of falling water have brought distinction to hydro technology for more than a century — ever since the first hydroelectric plant produced power in Appleton, Wis., in 1882.

Several hydro plants built in the late 1800s and in the early years of the 20th century continue to generate electricity today. These facilities — built before the advent of motor cars, airplanes and radio — demonstrate the payoff that hydro development and investments in high-quality equipment and workmanship can bring. 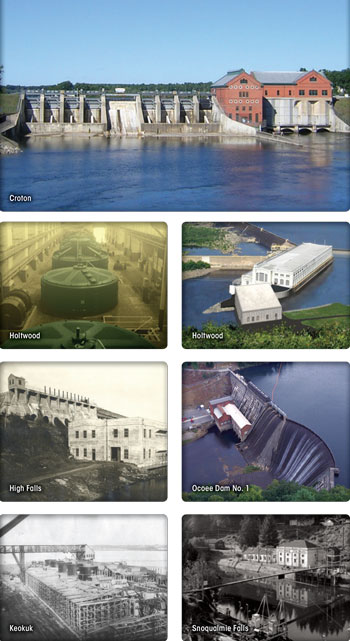 This was the legacy the Hydro Hall of Fame was created to demonstrate, and it has been doing so since 1995 when the first three plants were inducted. Since then, an additional 35 plants have been inducted.

As these plants serve as a bedrock for the industry, the editors of Hydro Review want to highlight some of them here, offering a glimpse of the unique architecture, surroundings, and historic achievements that have made them worthy of this honor. The photographs on the following pages provide a snapshot of the plants inducted into the Hall of Fame over the past 19 years.

The inductees are located in 16 states across the U.S. and four provinces in Canada. They range in capacity from 12.5 kW at the Vulcan Street Hydroelectric Central Station, commissioned in 1882, to the 200-MW Shawinigan-2 Plant, commissioned in 1911.

When considering plants for the Hydro Hall of Fame, more than just the age and the fact that they have operated continuously for a century (or more) are taken into account. Because many of these plants were constructed at a time when rural electrification was a challenging prospect, the impact these plants had on their respective regions was considerable. In addition, many of the facilities inducted into the Hydro Hall of Fame feature interesting back stories and stunning architecture, as well as representing important milestones in the development of the technology.

The 3.6-MW Ames project, inducted in 2013, is a unique example of the impact one plant can have on an industry. Despite its small size, the project made history as the first hydroelectric facility to generate, transmit and use alternating current (AC) for industrial purposes in the U.S.

In Canada, the 5.3-MW Petty Harbour Hydroelectric Development made history as the first hydro plant in Newfoundland, and it is currently providing 4% of the province’s power … 114 years after its commissioning.

Equally remarkable is the 14.75-MW Post Falls project, which began operating in 1906 and continues to run today using the same equipment installed more than a century ago.

The 6.7-MW Grand Rapids facility is an architectural achievement, landing a coveted spot on the National Register of Historic Places. Commissioned in 1910, the facility was designed to provide power for nearby industries and to be a major source of power for nearby communities in Wisconsin and Michigan.

All of these factors were considered when the inductees featured in Table 1 (on page 44) were chosen. Each plant was profiled in an article published in Hydro Review magazine, and the photos you see on these pages show just a few of the unique facilities that populate the Hydro Hall of Fame. I hope you enjoy this “trip down memory lane” and insight into these unique historic facilities.

For more information about the Hydro Hall of Fame, as well as a link to articles on each facility, visit www.hydroworld.com/index/hall-of-fame.

For the first time, the Hydro Hall of Fame is being widened to include nominees from outside North America, so if you are aware of any hydroelectric plant worldwide that has been in continuous operation for the past century, nominate it at the above website.

The inductees to the Hydro Hall of Fame for 2015 will be announced during the opening keynote session at HydroVision International 2015. So join us in Portland, Ore., the week of July 13 to find out which historic facilities are the latest to earn this prestigious distinction. And stay for great educational content, valuable networking opportunities, and an exhibit hall featuring the products and services of more than 300 exhibiting companies. Visit www.hydroevent.com for more information.