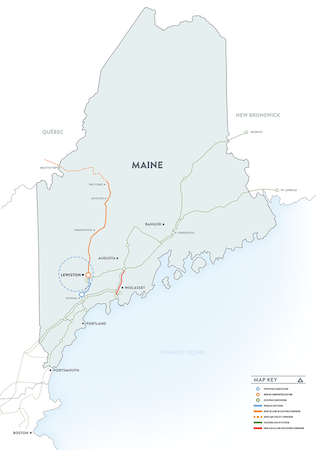 The successful negotiation of contracts this week move Hydro-Quebec’s plan to export surplus hydroelectric power into the New England region of the United States one step closer to fruition.

The Canadian utility and the Central Maine Power Co. announced yesterday they had struck a deal with the Massachusetts electric distribution companies (EDCs) for the New England Clean Energy Connect (NECEC), which would allow Hydro-Quebec to send about 9.45 TWh of power via high-voltage transmission line into the U.S. annually for 20 years.

“The conclusion of these negotiations marks a significant step forward for the NECEC and the people of Maine, who will realize lasting economic benefits from this initiative, including new job creation and targeted investments,” said Douglas Herling, president and CEO of Central Maine Power.

The Massachusetts EDCs will next file agreements with the state’s Department of Public Utilities, per terms of its 83D Clean Energy Request for Proposals.

“In the coming months we’ll be working closely with Central Maine Power to complete this important new interconnection project, which will not only reduce carbon emissions, but will also bring price stability and supply reliability to the region,” said Eric Martel, president and CEO of Hydro-Quebec.

The project is an alternative to the Northern Pass line, which failed to gain support from Massachusetts earlier this year.

Developers say the NECEC has several significant advantages over the Northern Pass, beginning with its smaller $950 million price tag. The line would also run entirely on land owned by Central Maine Power, with about two-thirds using existing transmission corridors.

Like the Northern Pass, however, NECEC faces opposition from groups fearful that the line and its associated infrastructure would be a detriment to the region’s scenery.

Opponents also claim the NECEC, Northern Pass and other proposed cross-border transmission projects are quick-fix for utilities looking to meet Massachusetts Gov. Charlie Baker’s call for them to increase the mix of renewables in their portfolios.