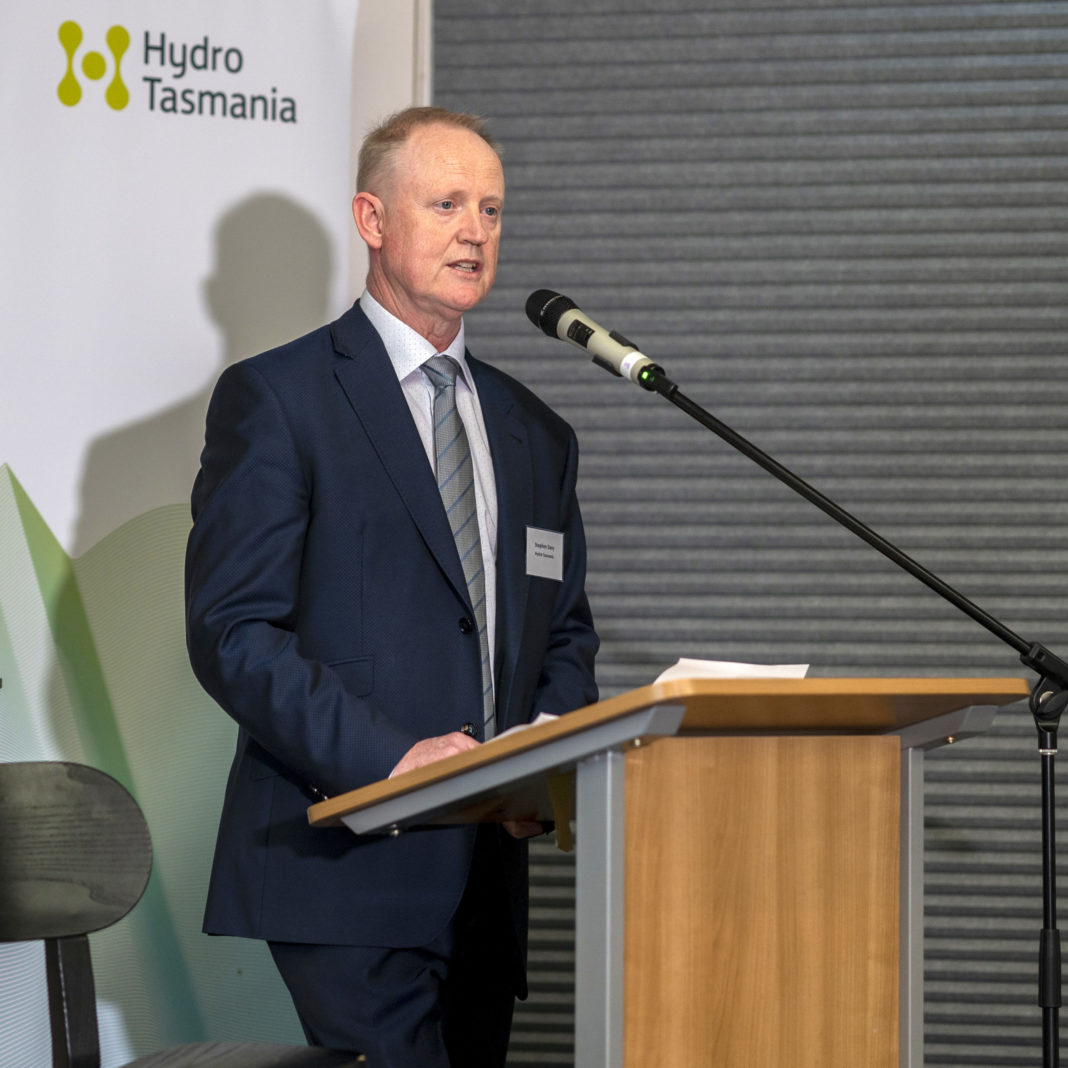 Davy has been with the company since 2005. He has been at the forefront of Hydro Tasmania’s shift to becoming an integrated energy business that enhances the value of its renewable energy while seeing the benefits returning to the state.

A representative from Hydro Tasmania is scheduled to speak during the Thursday morning utility executive roundtable session at HYDROVISION International 2020. In this exclusive interview, Davy shares his perspectives on hydropower’s role in a clean energy mix and the future of hydro as a storage battery to support and integrate intermittent renewables.

Q: Please give our readers an overview of Hydro Tasmania.

A: Tasmania is an island state to the south of Australia’s mainland. It’s about the size of Ireland but with a population of 515,000. People who’ve never been to Australia usually think about the Outback, Sydney or the beaches of the Gold Coast, but “Tassie” is completely different. The West Coast of Tasmania is one of the wettest and most rugged places in Australia, which makes it a perfect fit for hydropower. We’ve been operating in Australia’s National Electricity Market (NEM) since 2006, when the Basslink interconnector to the Australian mainland began operating.

Hydro Tasmania is Australia’s largest renewable energy generator, producing about 900 GWh of electricity annually from hydropower, and has over 100 years of history in the sector. Launceston in Northern Tasmania was one of the first cities in the world to be electrified, in 1892. We operate 30 hydropower stations, a gas-fired power station, six wind farms and 54 dams. And we’re Australia’s largest water manager.

The historic Lake Margaret Power Station is more than a century old.

Many of these generating assets are in incredible wilderness, and Tasmania’s tourism industry means people from all over the world visit our sites. So we balance our operational requirements with investment in environmental management, including of protected species that live in our catchments, and we keep the community and recreational users up-to-date on things like lake levels and our maintenance projects.

Hydro Tasmania’s role is purely in generation. We’re a government-owned business and in Tasmania there are separate government businesses that look after transmission and a separate retailer. We also have an engineering consultancy arm, Entura, and a retailer on the Australian mainland, Momentum Energy. But being government-owned, we have a regulated responsibility to maintain a secure energy supply at the best possible price for Tasmanian customers, while maximizing the return to the state.

Q: The vast majority of Hydro Tasmania’s generation portfolio is hydropower. What has been the benefit of focusing on this technology?

A: It’s not an exaggeration to say that what used to be called the Hydro Electric Commission effectively built modern Tasmania, so historically the benefits have been enormous.

We’re now in the position of hydropower being the largest source of flexible and controllable renewable energy generation in the NEM, with terawatt-hours of long-duration energy storage. Our existing assets are currently optimized for energy generation, but we can repurpose them to deliver more valuable capacity services and the long-duration storage Australia will need. Storage is an efficient way to match generation with load, so hydropower can be the backbone of a stable, reliable energy system.

Locally, hydropower has been a big contributor to Tasmania’s brand and clean, green image, which plays into our tourism, agriculture and produce sectors. Being Australia’s largest renewable energy generator was a good start to establishing our environmental management credentials, but that had to be backed with action. We played a key role in initiating and developing the Hydropower Sustainability Protocol in the early 1990s, which is now used by the industry globally.

More recently, our State Government has set a goal of creating enough renewable generation in Tasmania for us to be 100% self-sufficient. The state is on track to meet that, so the government’s recently announced new goal is for Tasmania to double its renewable energy generation by 2040. None of this would be possible without hydropower.

Q: You’ve announced your upcoming departure from Hydro Tasmania after 15 years, nearly seven of those in your current position. What trends have you seen within the company during this time?

A: Australia’s NEM started in the late 1990s, but Tasmania didn’t join until 2006, about a year after I started with Hydro Tasmania as a manager in the trading team. I watched our company get better and more sophisticated with contract and spot trading, supplier arrangements and our mainland retailing.

As CEO, I’ve seen the growing awareness of the importance of renewable energy from the public, business and government. That awareness has been fertile ground for the planning we’ve done for Hydro Tasmania’s future – to provide reliable clean energy to the Australian mainland through the Battery of the Nation pumped hydro initiative. In my time, this has gone from an idea, to an actionable plan, to what is becoming one of our country’s most important energy projects.

I’m very proud of this work and I’ll be watching on with interest as our vision for Battery of the Nation becomes a reality.

Q: How does wind technology fit with your hydroelectric backbone?

A: Wind farms are a critical part of the future for Hydro Tasmania and the entire NEM, which is undergoing unprecedented change in its generation mix. Nationally, the system is heavily reliant on coal generation, much of which is at or near end-of-life. The new energy sources that can most quickly and cost-effectively replace this are wind and solar power. However, variable renewable energy needs flexible supply and storage to help manage that variability. Our hydro power stations are the workhorses for our state to provide the baseload power, but the introduction of more variable energy sources right across Australia is creating the opportunity we’re exploring with our Battery of the Nation pumped hydro.

We built the first wind farm in Tasmania in 1998 and own three others in a joint venture. There are more wind farms being planned and constructed in Tasmania by private proponents who see the incredible wind resource our state has. Tasmania’s West Coast is exposed to the wind of the Roaring 40s, which is perfect for wind farms, but we still need to buffer their inherent variability.

The Musselroe wind farm is Tasmania’s largest and was completed in 2013.

Q: Tell us more about Hydro Tasmania’s desire to make Tasmania the “Battery of the Nation.”

A: Coal has been the backbone of Australia’s economy for a century and the primary source of cheap energy for most of Australia, but the Australian Government is forecasting that our country will have close to 50% renewable energy by 2030. Tasmania is uniquely placed because we already have the kind of large-scale renewable energy development Australia needs.

Our primary focus has rightly been on looking after our customers at home, and our first responsibility is to deliver the lowest possible energy prices to Tasmania, but we could do so much more.

Pumped hydro energy storage powered by renewables means we can use cheap wind and solar power, when the market’s in oversupply, to pump water back up hill into storage. We can then dispatch that energy when it’s needed into the market, when the sun isn’t shining and the wind isn’t blowing.

Coupled with more transmission and interconnection with the Australian mainland, we can make a much larger contribution of clean, green reliable power to the NEM than we do currently. So the key to Battery of the Nation is the Marinus Link interconnection project, which will see 1,500 MW of new interconnection across Bass Strait in two 750-MW cables. This is being managed by our colleagues at TasNetworks and is looking very positive.

Q: An important aspect of being a battery is storage, and Hydro Tasmania has reported investigating several sites for pumped storage development. What is the status of this work?

A: We have three potential sites for development, which have emerged as the most promising after a $2 million study funded by the Australian Renewable Energy Agency and Hydro Tasmania. We’re in the middle of a feasibility study that will identify the first pumped hydro project that can be ready to operate when additional Bass Strait interconnection comes online. We expect to make an announcement of a preferred pumped hydro site later in 2020.

A key focus in this project is engagement with the Tasmanian community, particularly those near the sites being investigated. In the past, there have been very bitter environmental and political battles over hydro development in Tasmania. Nowadays we talk about hydroelectricity in the context of a decarbonized economy, but it wasn’t always seen so positively. In the 1970s, there was great controversy in Australia over the proposed damming of Tasmania’s Franklin River, which was eventually stopped by the High Court in 1983. These events were part of the growing environmental awareness that we’re all conscious of today, not just in Australia but internationally.

So engagement and communication is essential, but so is doing the right thing. For example, we’ve excluded any work in Wilderness World Heritage Areas or National Parks, and we’re being clear that no new on-river dams are needed for this to work. By taking this approach, we hope Australians will come with us on this journey and share our excitement.

Q: You released a report saying Tasmania is “in a unique position to lead the nation in the production of green hydrogen from clean energy sources.” What do you think is the future here?

A: The technology around electrolysis, storage and transport of hydrogen is getting far more efficient and cheaper, and with the move to decarbonize the economy hydrogen becomes more attractive as part of a mix of energy sources. But it remains an energy-intensive process to extract the hydrogen, so if you use renewable energy to power the electrolysis, you eliminate the carbon trail and you get “green hydrogen.”

There are markets around the world looking to produce or import green hydrogen. With the right planning and investment, Tasmania can produce this on a large scale, 10% to 15% cheaper than other Australian power grids, because we already have the large-scale renewable energy infrastructure and we don’t need to offset the emissions.

Whether hydrogen becomes a permanent part of our energy mix or a transition fuel on the way to further electrification will depend on investment and government policies globally. It’s early days, but earlier this year the Tasmanian Government announced a $50 million package to build a renewable hydrogen industry in Tasmania. This forms part of the government’s goal to double our renewable energy generation by 2040.

Q: What are some of the challenges for electricity generation and supply that are unique to Australia?

Everyone will have seen the terrible bushfires in Australia earlier this year. Tasmania was less impacted this time, but we’re no strangers to bushfire. Those events have put climate change back at the center of public debate.

We’re a small country and globally we produce barely 1% of carbon emissions, but per capita we’re one of the world’s biggest emitters, because Australia’s a very energy-intensive economy. We’re a big country that requires major transport operations. We have large-scale heavy industry, mining and agriculture. This creates a lot of carbon, but our population is less than 25 million.

It’s no secret that Australian politics has been polarized on this issue for well over a decade. Australia is a signatory to the IPCC Paris Agreement and briefly had a national carbon pricing scheme that was removed in 2014. We also have a national renewable energy target, but there is still a large part of the economy tied up in coal mining and export. So there’s considerable volatility in the Australian energy landscape and it’s something that’s swung elections.

Negotiating a way through that political debate is very challenging, but Hydro Tasmania and Tasmania are in the enviable position of being able to deliver what people want and what the country and indeed the world needs – abundant clean energy. And that’s a great position to be in.