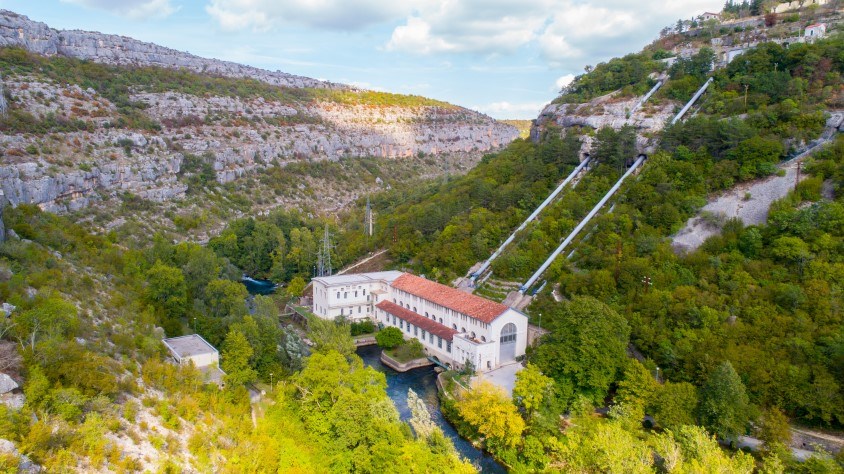 The 24-MW Miljacka hydroelectric project in Croatia has operated continuously since 1906, originally to provide electricity for a carbide factory. For its historic significance, Miljacka was inducted into the Hydro Hall of Fame in 2018.

The hydropower plant now called Miljacka (formerly named Manojlovac until the 1990s, after the waterfall at which it was built) has an installed capacity of 24 MW and is located on the Krka River in Croatia. It is one of the biggest hydropower plants on this river and has been constantly in operation since 1906.

Another thing that makes Miljacka special is the fact that it is located in the beautiful Krka National Park, famous for numerous wonderful waterfalls. In its operation, Miljacka complies with strict norms for protecting the environment and nature, as required by the status of the national park.

A noteworthy feature of the hydropower plant’s micro-location is the cave Miljacka 2, which is about 100 m downstream from the Miljacka waterfall on the right bank of the Krka River. It is home to many endemic and protected underground animals. The most attractive among them are an olm, a strictly protected and endangered species, and a long-fingered bat, whose colony with more than 4,000 individuals is one of the biggest in Europe.

For these and other reasons, in 2018 the Miljacka hydropower project was inducted into the Hydro Hall of Fame.

Construction and first years of operation

The beginnings of Miljacka are connected to the company SUFID from Trieste, which bought the concession for the Manojlovac waterfall – about 15 km downstream from the town of Knin — at the turn of the 20th century from Girgio d’Andrea Galatti et comp, also from Trieste. Then it expanded its concession to the waterfalls of Brljan, Rosnjak and Miljacka, which together with Manojlovac have a 106-meter fall.

These waterways were used to form Brljan Lake above the waterfalls during the construction of the dam and power plant. From the lake, water is led to the turbines through a gravitational tunnel, which is 1,620 m long and has a diameter of 10.7 m.

The high-pressure derivation plant was built between 1903 and 1906 and it represented one of the biggest technological achievements of the Austro-Hungarian Empire. The project was designed by a famous engineer, Otto Titus Blathy, one of the leading men of Ganz and Co. from Budapest.

Because of its location, the entire hydropower plant was built manually, and electromechanical parts were delivered from the Ganz factory in Budapest by train to Trieste, then by steamboat to Sibenik and finally by narrow-gauge railway and horse-drawn carriage to the construction site. It is especially fascinating that the gravitational tunnel was dug manually. The installation of the electromechanical parts of the power plant was carried out by experts from the Ganz factory.

Exterior of the powerhouse for the Miljacka hydropower plant

The first generator at the site started working in 1906 and the remaining three in 1907, when the hydropower plant commenced with full operation. In the engine room were four aggregates with Francis turbines, each with a maximum power of 6,000 hp. But because of a special river regime (very low water level in summer), the plant’s power was optimized at 15,000 hp. In that work regime, the aggregates were in operation until the 1950s without major repairs.

During its early days, Manojlovac was one of the biggest hydropower plants in Europe and a technological miracle of its kind. Namely, Manojlovac was then the only power plant in Europe from which generators were directly connected to a 30,000-volt power line, which is amazing even by today’s technological standards. Such an approach didn’t allow the slightest mistake because any inaccuracy in construction at such high voltage would lead to generator breakthrough. The insulation of the generator winding was subject to factory testing at 55,000 V, and it was able to endure a two-minute short-circuit!

A 35-km-long power line was used to transmit electricity generated in the first years of operation to the plant’s only customer — SUFID’s factory of calcium carbide and cyanamide (chemical fertilizer) in Sibenik, which was one of the biggest in the world by production until 1925. The hydropower plant did not have the possibility of consuming electricity for its own needs, so they used gas lamps to light the plant. It wasn’t until before World War II that a small transformer of 30/0.4 kV and an aggregate with a 40-kW Pelton turbine were installed for the hydro plant’s own electricity consumption.

The first employees at Manojlovac were people from the surrounding areas who mostly drew their knowledge on managing a hydropower plant from Giuseppe Franzotti, the Ganz engineer, who worked on the hydropower plant construction and became its first “head of plant.” Because of its location, Manojlovac had employees of specific occupations in its first years. One example is a job called power line keeper, probably because of conflicts with local peasants, over whose parcels the power line passed.

Interestingly, the first description of this hydropower plant published was in an article by engineer Hugo Tenzer in the journal Elektrotechnik und Maschinenbau — Vienna, published in 1908.

Connection of Manojlovac and the carbide factory

Manojlovac’s fate was closely connected to the carbide factory in Sibenik and the business of its first owner, SUFID. Thus, Manojlovac had a direct influence on the industrialization of Sibenik and that part of Croatia. The factory’s operation was relatively intact during World War I (instead of mobilized men, women were employed for the first time), so generation continued successfully.

The first problems arose with the economic crisis in 1929. The Kingdom of Yugoslavia did not prolong the concession for the use of water to the SUFID factory, which made the Italian owners sell the shares to the French company La Dalmatienne.

The carbide factory worked at full capacity by 1939, which positively affected the development of that part of Dalmatia. Immediately before the start of World War II, Yugoslavia nationalized the factory, but the war stopped its planned further development. During the occupation by Italy, the factory and Manojlovac were in operation but with problems connected to the shortage of raw materials and more frequent outages caused by partisan diversions. Two original generators from that time are still in the hydropower plant, whereas the remaining two were taken to Sibenik for reconstruction during World War II by its Italian owners. One aggregate was cut and thrown onto the scrap heap, and the other was taken to Italy and never brought back.

From World War II to today

As World War II ended, the operators of Manojlovac began with preparations for the connection into a wider electricity grid, which was supposed to enable a more effective use of the power plant and the transmission of electricity for longer distances, which would lead to abandoning the autonomous (isolated) system of customer supply. The hydropower plants Jaruga on the Krka River and Kraljevac on the Cetina River were included in the wider electricity grid.

The first parallel operation of Manojlovac and Jaruga was achieved by the construction of the Lozovac substation in 1947. Manojlovac was included in the central Dalmatian electric power system in 1948 (together with Jaruga and Kraljevac). That was when it was finally enabled for the plant to be lit by electricity from the grid.

The first significant reconstruction of Manojlovac occurred between 1952 and 1956, when only one original aggregate remained in operation. At that time, the other three units were replaced by new ones (with 6.7-MW turbines). The modernized hydropower plant could, in the most difficult period, cover daily consumption peaks because the other two power plants constructed by then, Kraljevac and Jaruga, were in operation as run-of-river plants. During the 1960s and 1970s, Manojlovac was in operation without bigger overhauls and repairs. Then, during the 1980s, restoration of the power plant was conducted, as it was affected by the ravages of time.

During the Homeland War, Miljacka was on a temporarily occupied territory between 1991 and 1995. But in spite of bad maintenance in war conditions, it never completely stopped its generation.

Miljacka was renovated by 1997, and the new processor-based management and automation system was installed in it as one of the first hydropower plants in Croatia. Today, Miljacka with its four aggregates and the total capacity of 24 MW annually generates about 80 GWh of electricity on average.

The experience gained on Miljacka was precious for the development of the power industry in Europe, so that numerous others hydropower plants in Europe were built according to its principles.

Mario Kraljevic is an engineer with HEP Proizvodnja d.o.o., which owns the Miljacka facility.

Further historic hydroelectric plants will be inducted into the Hydro Hall of Fame in 2020. The awards will be presented at HYDROVISION International, held July 14 through 16 in Minneapolis, Minnesota, in the U.S. Click here to learn more and to attend.