Editor’s Note: Below is the 2012 audited consolidated financial statement under the International Finance Reporting Standards (IFRS), as provided by hydroelectric power producer and utility JSC RusHydro. The statement appears in full as provided to HydroWorld.com by the company.

RusHydro Group‘s financial results for the reporting period include the results of a number of retail companies1, which were accounted for until the disposal date — March 28th, 2011, when these companies were contributed to the share capital of OJSC Inter RAO UES in the course of the share issue of the latter. 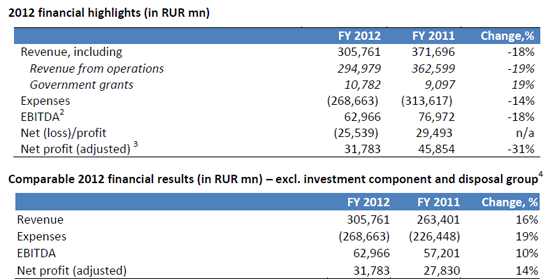 In the reporting period, EBITDA decreased by 18% to RUR 62,966 mn compared to RUR 76,972 mn for the previous year. Decrease in EBITDA is related to a change in the Group’s structure and removal of the special investment component in capacity prices in 2012. Comparable EBITDA rose 10% on the back of increase in electricity output and unregulated power prices and growth of subsidies in the Far East.

Comparable net profit was up 14% due to higher power sales in unregulated sectors.

Key indicators of RusHydro Group’s financial position as at December 31, 2012

As at December 31st, 2012, the Group’s assets increased by RUR 42,964 mn to RUR 854,747 mn against the comparable figure as at December 31st, 2011. The increase in assets is primarily due to additions to the Group’s fixed assets and construction in progress (mainly Sayano-Shushenskaya HPP and Zagorskaya GAES-2) and placing of short-term deposit in JSC Sberbank of Russia in the amount of RUR 50,000 mn received in the course of additional share issue of the Company.

As at the end of the reporting period the Group’s liabilities rose by RUR 30,228 mn since December 31st, 2011, to RUR 316,352 mn. The increase in the liabilities was mainly caused by new borrowings raised from JSC Sberbank of Russia, European Bank for Reconstruction and Development, JSC Bank of Moscow, UniCredit Bank Austria AG.

The consolidated financial statements of the Group are available at: http://www.eng.rushydro.ru/investors/reports/

2 EBITDA is calculated as operating profit before depreciation of property, plant and equipment and non-cash impairment charges.

3 Net profit is adjusted for the effects of impairment on the Group’s property, plant and equipment, available-for-sale financial assets, investments in associates, long-term promissory notes, goodwill and intangible assets, and for effects ofaccounts receivable impairment, loss on disposal of property, plant and equipment and remeasurement of net assets of OJSC “DRSK” to fair value less cost to sell.

4 Comparable financials are calculated by excluding from 2011 results earnings from an investment component, included in capacity prices of RusHydro’s hydropower plants and discontinued starting from 2012, and the results of a number of retail companies, which were accounted for until the disposal date — March 28th, 2011, when these companies were contributed to the share capital of OJSC Inter RAO UES in the course of the share issue of the latter. These comparable results were calculated using management accounting, were not audited and are presented for general information.