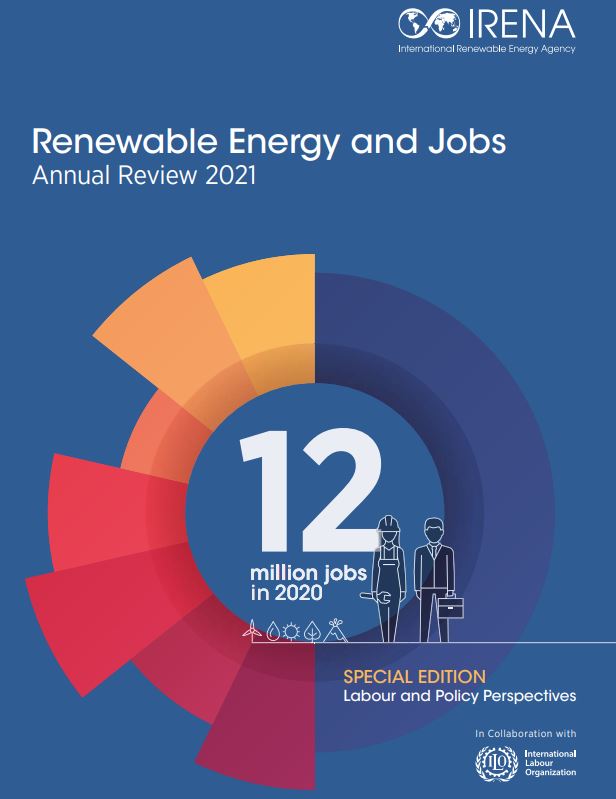 The report confirms that COVID-19 caused delays and supply chain disruptions, with impacts on jobs varying by country and end use and among segments of the value chain.

The 1.5°C pathway IRENA put forward in its World Energy Transitions Outlook will lead to 122 million energy sector jobs globally by 2050 (of which 43 million will be in renewables), according to the report. Solar photovoltaics will provide the most jobs by 2050 (20 million), followed by bioenergy, wind and hydropower.

Growth in hydro recovered in 2020 after a few consecutive years of decline. Several large projects delayed in 2019 were commissioned in 2020. Additionally, hydroelectric projects had trouble obtaining financing and up-front capital. Revenue difficulties arose because of changes in currency valuation, inflation and the pandemic’s economic fallout.

With regard to both deployment and jobs, the situation in 2020 varied across countries. On the one hand, the Chinese government reintroduced hydropower development, particularly pumped storage, into its five-year development plan. In 2020, China added 12 GW of capacity. The 13th Five-Year Plan includes a target of 470 GW of hydropower capacity by 2025. On the other hand, countries such as Argentina and Brazil experienced a reduction in demand that resulted in the cancellation of a new round of energy auctions in Brazil that included hydropower projects.

The potential for micro- and small-scale hydropower units is substantial, thanks to relatively low capital investment and the advantages offered by particular geographic features. While less job intense than large-scale projects, the unique nature of the technology makes small hydro ideally suited to community ownership, which can be the key to unlocking the economic potential of hard-to-reach rural areas.

Although IRENA included wave and tidal (ocean) energy in its report, this was lumped under an “others” category and thus numbers are not available for these technologies alone. The only specific numerical quantification says there were about 1,000 jobs in ocean energy in 2019 to 2020.

“Renewable energy’s ability to create jobs and meet climate goals is beyond doubt. With COP26 in front of us, governments must raise their ambition to reach net zero,” says Francesco La Camera, IRENA director-general. “The only path forward is to increase investments in a just and inclusive transition, reaping the full socioeconomic benefits along the way.”

“The potential for renewable energy to generate decent work is a clear indication that we do not have to choose between environmental sustainability on the one hand, and employment creation on the other. The two can go hand-in-hand,” said ILO Director-General, Guy Ryder.

Fulfilling the renewable energy jobs potential will depend on ambitious policies to drive the energy transition in coming decades. In addition to deployment, enabling and integrating policies for the sector itself, there is a need to overcome structural barriers in the wider economy and minimize potential misalignments between job losses and gains during the transition.

Indeed, IRENA and ILO’s work finds that more jobs will be gained by the energy transition than lost. An ILO global sustainability scenario to 2030 estimates that the 24 million to 25 million new jobs will far surpass losses of 6 million to 7 million jobs. Some 5 million of the workers who lose their jobs will be able to find new jobs in the same occupation in another industry.

IRENA promotes the widespread adoption and sustainable use of all forms of renewable energy, including bioenergy, geothermal, hydropower, ocean, solar and wind energy.