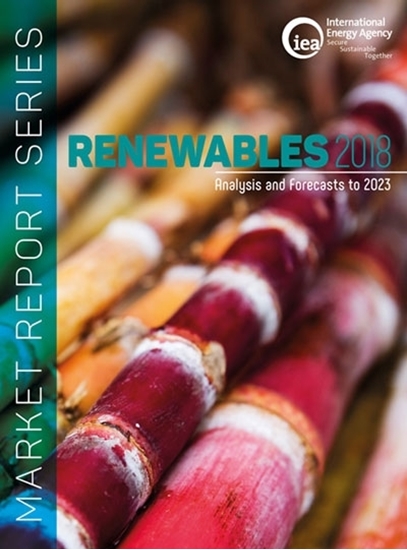 Hydro will meet 16% of global electricity demand by 2023, followed by wind at 6%, solar PV at 4% and bioenergy at 3%. Hydropower capacity is expected to increase 125 GW, which is 40% less than from 2012 to 2017. The report says this is due mainly to less development of large projects in China and Brazil, where “concerns over social and environmental impacts have restricted project pipelines.” Meanwhile, deployment in India, Africa and Southeast Asia accelerates in response to new demand, untapped resource potential, and attractive economics to improve electricity access affordably.

Specific to pumped storage, one-fifth of the overall growth (26 GW) is from these projects, with China leading this growth.

The report also touches on marine technologies, saying they account for the smallest portion of renewables growth because expansion typically comes from small-scale demonstration and pilot projects of less than 1 MW. Larger projects emerging in France and the UK are boosting capacity growth, the report says, with tidal technology expected to account for 50% of all marine-based additions globally.

Renewables will continue their expansion in the next five years, covering 40% of global energy consumption growth, IEA says. Their use continues to increase most rapidly in the electricity sector and will account for almost a third of total world electricity generation in 2023. Renewables use will expand far more slowly in the transport and heat sectors, due to weaker policy support and additional barriers to deployment, IEA says.

By comparison, bioenergy will be the renewable resource with the largest growth between 2018 and 2023. This is because of its widespread use in heat and transport, IEA says.

Calling bioenergy “the overlooked giant of the renewable energy field,” IEA Executive Director Dr. Fatih Birol said, “Its share in the world’s total renewables consumption is about 50% today, in other words as much as hydro, wind, solar and all other renewables combined.”

China leads global growth in renewable energy and will become the largest consumer of renewable energy, surpassing the European Union by 2023. Brazil will have the highest share of renewables, reaching almost 45% of total final energy consumption in 2023, driven by significant contribution of bioenergy and hydropower, IEA says.

Solar PV will dominate renewable electricity capacity expansion, the report says. Solar PV is forecast to expand by almost 600 GW, reaching 1 TW by the end of the forecast period.

Wind remains the second largest contributor to renewable capacity growth, and wind capacity is expected to expand by 60%.