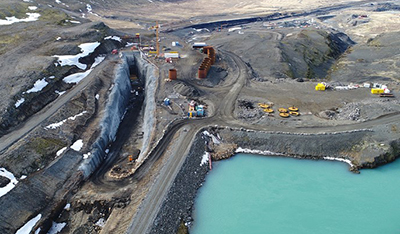 Landsvirkjun, Iceland’s state-owned utility, has issued a green bond for a total amount of US$200 million in relation to the 90-MW Theistareykir geothermal station in Northeastern Iceland and the 100-MW Burfell II hydroelectric project on Thjorsa River in southern Iceland.

Landsvirkjun is the first company in Iceland to issue a bond in Green Bond format and the bonds “are maturing after 4, 5, 7 and 10 years. They carry 4.14% on average interest rates on a six-monthly basis,” according to the utility.

Landsvirkjun said it expects net debt of the company to decrease in 2018.

The scheme includes Karahnjukar Dam, the tallest concrete-faced rockfill dam in Europe and among the largest of its kind in the world, according to the utility.

Islenskir Aoalverktakar (IAV), part of Marti Holding located in Moosseedorf near Bern, Switzerland, started construction of the Burfell II plant in April 2016 and the company says completion is expected at the end of April 2018. The new plant will utilize water which flows past the current 270-MW Burfell hydropower station intake.

IAV said Andritz Hydro Gmbh is supplying a single 100-MW Francis turbine for the project, but the power house design allows for an expansion of up to 40 MW.

The powerhouse will be located in a cavern, 300 m inside Samstadaklif Mountain and roughly 150 m below Bjarnalon Pond. DSD Noell Gmbh, based in Germany, is constructing a steel penstock between the intake structure and the powerhouse. An outlet tunnel will be constructed by drilling and blasting 450 m out from the powerhouse, where water will flow into a canal, which will run for 2 km to Pjorsa River.

With the construction of Burfell II, Landsvirkjun said the capacity of Iceland’s electricity grid could increase annually by as much as 300 GWh.

Currently, according to Landsvirkjun, Burfell station operates close to its capacity 60% of the time. During the winter months, on average 30 m3/s of discharge passes by the station and more than 100 m3/s from May to September.

A plan to further expand Burfell station beyond its 270 MW with an additional 100 MW was initially put on hold, but Landsvirkjun decided to revive the plan and build a new hydropower plant to reduce the load on the original plant.

A 2013 geological study submitted to Landsvirkjun indicated an underground scheme would be the best economical solution and possibly more environmental friendly.

Landsvirkjun is the country’s largest power producer, generating around 70% of all electricity used in Iceland with 100% renewable energy sources.