A simplified method is available for evaluating the role of pumped-storage hydro plants in a utility’s long-term planning. The method, previously used for ranking conventional power plants, can be adapted for quick analysis of the competitiveness of pumped-storage projects.

Pumped storage hydropower plants (PSPs) have been used in power systems to satisfy growing demands for large, highly variable electricity supplies. A renaissance of PSPs occurred at the beginning of the 21st century, when many such plants were built, particularly in countries where large quantities of wind and solar facilities had been installed (such as Austria and Switzerland), to deal with the intermittent nature of their generation. The use of PSPs has risen quickly, as it is practically the only technology capable of ensuring the integration of electricity from such variable generation technologies into national power grids.

PSPs exhibit excellent ability to follow system load. Table 1 on page 30 provides an illustration of the superiority of PSPs over conventional generation technologies. This analysis excludes conventional hydroelectric plants, whose flexibility parameters mainly depend on their types. For example, high-head hydro plants are the most convenient in this respect, which is not the case with low-head, run-of-river plants.1

PSPs and the selection process for new investments in generation

The long-term development planning process includes selection of new technically suitable generation and transmission additions required to meet future demand. This process is mainly based on long-term load forecasts, which map the annual changes in demand. The role of a new power plant depends on its operational and cost parameters, as well as on the structure and features of all other plants in the generating mix. Practical system operation defines the commitment and loading of particular power plants, both existing and new ones. This is usually based on minimum overall costs within the system in the specified time period.2,3 The same criterion is used in the development planning process, when the expected contribution of each new plant to the power system goal is used for its comparison with other alternatives.

Rating a new plant based only on its investment and other costs and expected generation is not always justifiable, as there are exceptions in the case of subsidies (e.g. feed-in tariffs), or special clauses of power purchase agreements, when renewable energy sources (RES) are considered. Therefore, other criteria such as reliability, flexibility, availability and environmental impacts must be addressed in determining the final solution. Deregulation and market liberalization, subsidies for the use of RES, etc., create a new planning environment, and therefore substantial changes in planning procedures are required, besides the minimization of costs.3

Valuing operational effects of PSPs in the planning stage

The selection criterion for capacity additions in a power system is the minimum of total expenses, subject to the required level of security of supply.4 This criterion could be adjusted to specific conditions in a country (fuel import dependency, level of penetration of RES) or to meet environmental constraints.

Cost-benefit analysis (CBA) is usually applied for the selection of new power plants, where plant candidates with a more favorable benefit to cost (B/C) ratio get higher ranking.3 However, the question is whether such an approach is justifiable from the viewpoint of a power company, particularly with regard to its market position. The optimization criterion can then be changed to maximum profit instead of minimum cost.

When considering the economy of particular power plants during the planning stage, the concept of economic value often is used. Economic value is defined as the ratio of the net present value (NPV) of the total costs and energy generated during the plant working life, discounted to the initial year of the investment.4,5,6,7 This ratio, called the levelized cost of electricity (LCoE), is calculated using the following formula:2

— NPV(C) is the discounted sum of net annual costs Ck during plant lifetime of K years; and

— NPV(W) is the discounted sum of annual generation Wk, during the plant lifetime of K years.

The NPV values of net costs are calculated as:

— i denotes the annual discount rate.

Net annual costs are calculated as:

— CI is the investment cost, calculated as CI =A(k,i)·cI·P, where A(k,i) is the annual installment of investment loan pay-off in the year k, with cI being specific cost per unit of installed capacity P of the plant;

— Cf is the energy cost, calculated as Cf =cf Wk, where cf is the specific fuel cost and Wk is annual generation. In the case of PSP, cf is replaced by the cost of electricity cp used for pumping water from the lower to the upper reservoir;

— Cot are other costs that include all other expenses (e.g. network upgrade costs, congestion costs, CO2 abatement cost, integration costs, transmission costs) during the year k; and

— (RV)k is the residual value of the plant at the end of year k.

The dominant cost components in Ck are the investment and fuel costs (i.e. costs of water pumping).

NPV of the energy generated during the operation lifetime of K years is:

— r is the annual degradation coefficient to indicate plant aging and wear.

LCoE is the first useful information for investors about new, prospective project costs, assuming the certainty of future forecasted revenues and stability of the plant construction and operation costs and electricity prices on the market. In addition, LCoE is often considered a convenient overall measure of the competitiveness of different generating technologies. It represents the average cost per kWh of construction and operation of a plant over its lifetime and anticipated duty cycle.4,5,6,7,8 However, LCoE does not represent the value of generation for a power system in a certain period within a year.4 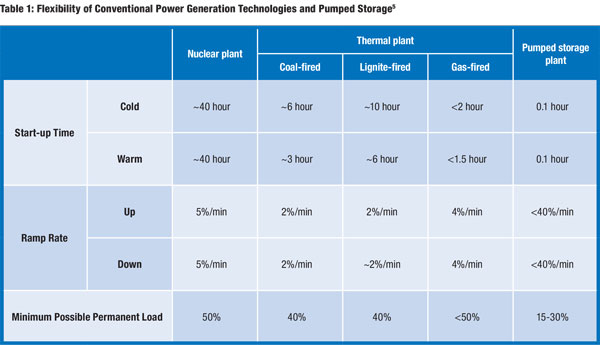 It is obvious that better economy of the plant is achieved with a smaller value of LCoE.6,7,8,9 Then, the minimum of LCoE could be used as the criterion for ranking the candidates in the process of generation planning, provided that their availabilities and reliabilities are taken into account. Although it may look simple at first sight, the LCoE criterion hides a few serious shortcomings, influencing the reliability and objectivity of the resulting conclusions. For example, questions could be raised regarding the accuracy of the considered plant generation forecasts during the entire operational life (30 years or more), a long time in advance. Therefore, to be useful, such forecast must be made upon the simulations of real operation of each power plants in the system, year by year, during the whole studied period.

It is important to note that, while LCoE is a convenient measure of the competitiveness of different generation technologies, actual plant investment decisions are affected by many other technological and operational issues, such as: forecasted utilization rate, existing generation mix, system loads, share of intermittent resources, etc.4,5,6,7 For this reason, it is necessary to provide other information, besides investment and operational costs, for all plants and technologies, such as reliability, flexibility, availability and environmental impacts, which are not all possible to express in monetary terms.

Case study of a new PSP in Siberia

To demonstrate the adequacy of application of the LCoE concept for PSPs, the prospective Bistrica PSP in Serbia is used as a case study.9 That PSP is considered for construction by 2020, with planned generation capacity of 680 MW from four 170 MW units and useful volume of upper storage reservoir of 80 million m3 (with generation potential of 65 GWh at the head of 365 m9). The foreseen total investment costs are estimated to be €552.8 million (US$635 million).

The power system in Serbia is based on low-quality lignite with about two-thirds of annual generation and the rest on hydro generation, dominated by run-of-river plants. As such, it calls for the PSPs to be used during low demand periods to store extra energy generated either by steam plants due to their high minimum loads and/or by hydropower plants to prevent water loss by overflow. In that case, the marginal cost price of electricity used by PSP for pumping is estimated to be cph=€0.011/kWh ($0.013/kWh), corresponding to hydro overflow within the system, and cpt=€0.040/kWh ($0.046/kWh) corresponding to the energy produced by the lignite-fired steam plants.

With the available energy resources in mind, it can be concluded that the lignite and hydro potential will remain the backbone of the Serbian power system for the mid and long term. Based on the expected structure of generation mix with a growing share of intermittent RES and an increasing demand for electricity in Serbia and the neighboring countries, it was found by simulation that Bistrica PSP could produce between 425 GWh and 560 GWh annually. Besides, it can provide reserve capacity services, thus strengthening its combined profitability at the local and regional markets.

Our goal was to find out whether the PSP operation within the above range would be profitable enough to justify the investment. For that purpose, we assumed two discount rates: i=6%/year and i=8%/year, and the above cost prices for electrical energy needed by the PSP pumping regime. The LCoE was calculated using Equation 1, with cf=cpt and cf=cph for pumping energy from thermal and hydro power plants, respectively. Figure 1 shows the calculated values of LCoE for four options, with annual plant generation in the range of 425 to 560 GWh.

To estimate profitability of the PSP, the LCoE values are compared with an anticipated average market price of its combined energy and capacity services. Evidently, it is possible to achieve profitable operation (LCoE â‰¤ selling price) in only three considered options, while with option 4 (cpt=4 €c/kWh; i=8%/year) it is not possible to operate profitably within the predicted range. Unlike in Option 1, the lower generation limit in Options 2 and 3 should be above 425 GWh/year (460 GWh/year in Option 2 and 470 GWh/year in Option 3).

The value of €0.165/kWh is found1 as an average LCoE for PSP generation corresponding to the cost of €0.053/kWh for electricity from lignite-fired plants used for pumping. If taken for reference, this value is close to the maximum LCoE of €0.17/kWh for Option 1 (LCoEs vary from €0.115/kWh to €0.17/kWh within the range) but with much cheaper electricity for pumping from hydro plants. For the same LCoE, the minimum generation for Option 2 should be at 470 GWh/year and for Option 3 at 495 GWh/year, but with electricity for pumping from lignite plants. Evidently, Option 1 appears to be the most convenient for the PSP studied, while for the other two options, 2 and 3, minimum generation is required to be higher.

Among the energy storage technologies used for balancing power systems with intermittent RES, PSP is the only one capable of offering practical means to integrate these uncontrollable electricity producers. This is due to the excellent capability of PSPs to store electrical energy for use when balancing generation and load is needed, as well as to quickly react to compensate the changing grid conditions.

However, it is not easy to carry out this task with standard optimization models commonly used for long-term generation expansion planning based on conventional power plants because various specific aspects of PSPs must be addressed as well. If adapted to PSPs, the LCoE concept allows a fairly correct comparison of PSPs and other technologies on the basis of weighted average generation costs. By it, different power plant locations, technologies, risks and cost trends could be taken into account, by using current and future investment, operation, and other costs, as well as the expected cost trends.

The LCoE approach also allows a comparative evaluation of the sensitivity to the variation of the most important input parameters, as is demonstrated in the case study presented in this article.