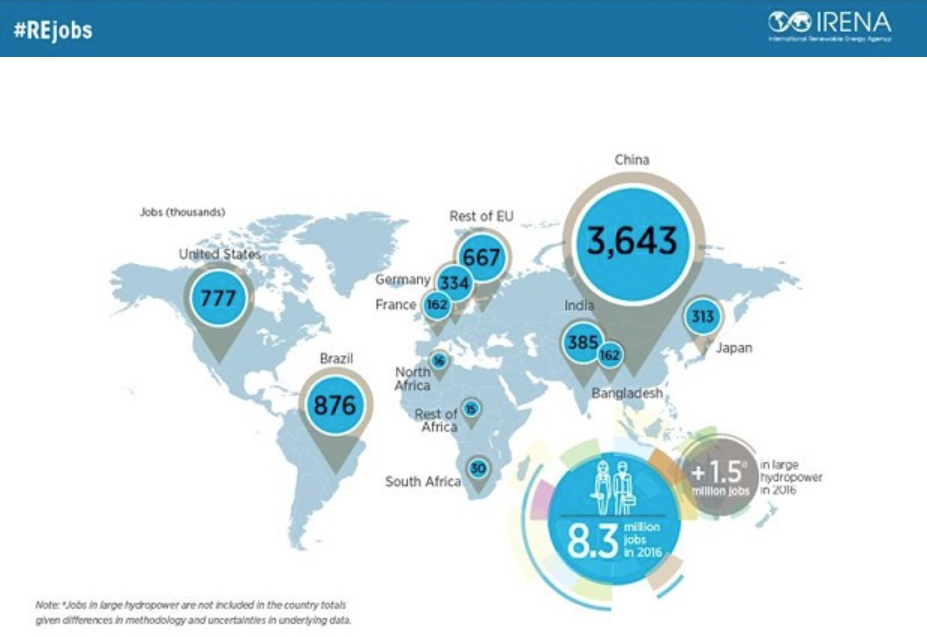 When accounting for direct employment, the largest renewable energy technology by installed capacity — large hydropower, the total number of global renewable-energy jobs climbed from 8.3 million to 9.8 million in 2016, according to a report released on May 24 during the 13th Council of the International Renewable Energy Agency (IRENA) in Abu Dhabi, U.A.E.

“Renewable Energy and Jobs — Annual Review 2017,” provides the latest employment figures of the renewable energy sector and insight into the factors affecting the renewable labor market.

“IRENA has provided this year a more complete picture on the state of employment in the renewables sector, by including large hydropower data. It is important to recognize these additional 1.5 million working people, as they represent the largest renewable energy technology by installed capacity,” said Rabia Ferroukhi, head of IRENA’s Policy Unit and deputy director of Knowledge, Policy and Finance.

In March, an IRENA study commissioned by Germany for the German government says investments into renewable energy and energy efficiency could bolster the global economy by US$19 trillion by 2050.

In January, HydroWorld.com reported IRENA and Abu Dhabi Fund for Development partnered to provide US$15 million to construct a hydroelectric plant in the Solomon Islands.

According to the annual review, available here, China, Brazil, the United States, India, Japan and Germany accounted for most of the renewable-energy jobs. In China for example, 3.64 million people worked in renewables in 2016, a rise of 3.4%.

“Falling costs and enabling policies have steadily driven up investment and employment in renewable energy worldwide since IRENA’s first annual assessment in 2012, when just over seven million people were working in the sector,” said IRENA Director-General Adnan Z. Amin. “In the last four years, for instance, the number of jobs in the solar and wind sectors combined has more than doubled.

“Renewables are directly supporting broader socio-economic objectives, with employment creation increasingly recognized as a central component of the global energy transition. As the scales continue to tip in favor of renewables, we expect that the number of people working in the renewables sector could reach 24 million by 2030, more than offsetting fossil-fuel job losses and becoming a major economic driver around the world,” Amin added.

In Africa, according to the report, utility-scale renewable energy developments have made great strides, with South Africa and North Africa accounting for three-quarters of the continent’s 62,000 renewable jobs.