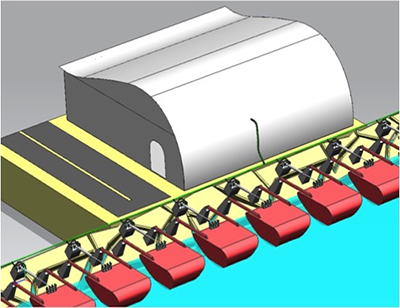 Yam Pro Energy has signed a US$180 million memorandum of understanding with Shapoorji Pallonji Group to build the first phase of a 150 MW marine energy facility on the coastline of Accra, Ghana, on West Africa’s Gulf of Guinea.

Yam Pro Energy is a wave energy development company based in Israel. Shapoorji Pallonji (SP) Group is an Indian business conglomerate that has annual revenue estimated at about $4.2 billion. SP is also the largest individual shareholder in Tata Sons, the holding company of Tata Group.

According to an announcement last week, Yam Pro Energy said the initial 10 MW phase 1 of the project is scheduled for completion within the next three years.

According to Tashtiot, about US$8 million has been invested in developing the company’s technology.

Yam Pro says its system captures energy from the ocean’s waves via floaters that are designed to the geographical region. Incoming waves lift and drop the floaters and this continual motion generates energy. A test project deployed at the port of Jaffa in Israel has been in operation for more than two years.

Zeev Peretz and Laser Rothshtein, Yam Pro Energy’s co-chief operating officers, in a press release said, “We are very excited today reaching such a substantial milestone as one of the largest EPC companies in the world is giving confidence in our technology and company and are willing to start a cooperation in Ghana. We are hoping this will be a start of a global cooperation with SP that we can together revolutionize the energy market around the world.”

The company said it has secured a power purchase agreement from the Electricity Company of Ghana.

This latest MOU follows other marine energy and conventional hydropower activity in Ghana.

In January 2016, HydroWorld.com reported Zoetic Global signed a 20-year power purchase agreement with the Electricity Company of Ghana for 100 MW of power generation from a hydrokinetic project at Akosombo Dam.

In 2015, Ghana began a 4 MW expansion at the 400-MW Bui hydropower project, located on Black Volta River. The Bui facility is the second-largest project in Ghana behind the 1,020-MW Akosombo hydropower project.

According to information from the Africa-EU Renewable Energy Cooperation Program (RECP), Ghana has significant hydropower potential that is currently being utilized by the 160-MW Kpong hydropower facility on the Vlota River in Akuse and the Akosombo and Bui hydro plants. Combined, the facilities supply a total of 1,580 MW. RECP says Ghana has 22 small- and 17 medium-sized unexploited sites with capacities ranging from 15 to 100 MW and a combined total capacity of around 800 MW.

RECP is a multi-donor program that supports the development of markets for renewable energy in Africa. It was launched by more than 35 African and European Ministers and Commissioners under the Africa-EU Energy Partnership.