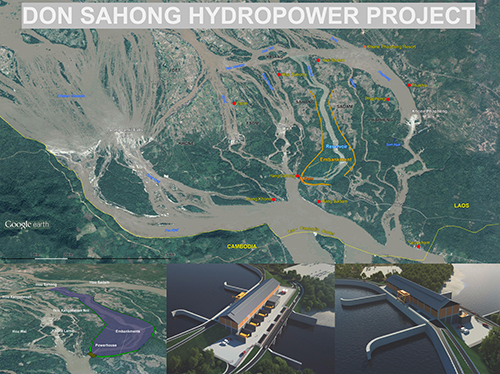 On Tuesday, MFCB said its Mega First Investments (L) Ltd. has entered into facility agreements with various financial institutions for term loan facilities totaling $85 million and an Islamic financing facility of up to $65 million.

According to the Mekong Eye, based in Bangkok, Thailand, in 2016 it estimated the cost of the Don Sahong hydropower project at US$500 million.

The facilities would be used to partly finance the construction of the project undertaken by Don Sahong Power Co. Ltd, says Mega First, which is involved in power generation and property development.

In September 2015, the Lao PDR parliament — the National Assembly — announced the run-of-river hydropower scheme is being built at the Mekong River near Khone Falls in Champasak province, located on the southern end of the Sahong channel.

At this location, just before the Mekong River enters Cambodia from Laos, it splits into many different branches and plunges over the 20-meter-high Great Fault Line. The resulting maze of braided channels forms the wetland of Siphandone, or “Four Thousand Islands.”

The project will utilize 15% of the total Mekong flow.

The dam and associated embankments will create a small head-pond inundating about 308 acres of land between the islands of Don Sahong and Don Sadam.

Efforts to improve the environmental and social sustainability of southeast Asia’s hydropower sector took a step forward in September with the signing of an agreement by Lao PDR and International Finance Corp. (IFC).

The partnership will launch what the IFC calls Lao PDR’s “first cumulative impact assessment” in the Sekong River Basin, which is shared with neighbors Vietnam and Cambodia. IFC said the study and additional actions will help spur private sector investment into Laotian renewables.

In June 2015, Lao PDR and neighboring countries used the Mekong River Commission (MRC), an inter-governmental consultation organization, to negotiate affected flow rates from the Mekong River prior to the Don Sahong project’s construction.

The Don Sahong is the second Lao PDR scheme to use MRC processes. Prior to constructing the 1,285-MW Xayaburi hydroelectric project, stakeholders also used MRC process for that scheme, which is located on the Lao PDR portion of the Mekong River.

In March 2015, Mega First signed an agreement with state-owned utility Electricite du Laos (EDL) to regulate its participation in developing the hydropower project.

Per the agreement, Ground Roses Ltd., Silver Acreage Ltd. and EDL would hold 79%, 1% and 20% shares in the Don Sahong Power Co. Ltd., respectively.