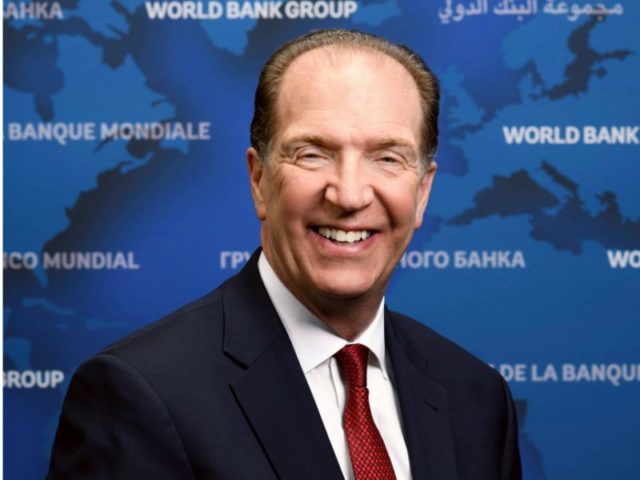 The Board expressed its deep gratitude to Interim President Kristalina Georgieva for her dedication and leadership in recent months. Georgieva took over for President Jim Yong Kim, who stepped down earlier this year.

The board says it looks forward to working with Malpass on implementation of the Forward Look and the capital package agreement as articulated in the Sustainable Financing for Sustainable Development Paper.

Malpass previously served as Under Secretary of the Treasury for International Affairs for the U.S. He represented the U.S. in international settings, including the G-7 and G-20 Deputy Finance Ministerial, World Bank-IMF Spring and Annual Meetings, and meetings of the Financial Stability Board, the Organization for Economic Cooperation and Development, and the Overseas Private Investment Corporation.

Before becoming Under Secretary, Malpass was an international economist and founder of a macroeconomics research firm based in New York City. He also served as U.S. Deputy Assistant Secretary of the Treasury for Developing Nations and Deputy Assistant Secretary of State for Latin American Economic Affairs. In these roles, he focused on economic, budget, and foreign policy issues, such as the U.S.’s involvement in multilateral institutions, including the World Bank.

The World Bank is active in hydropower and dams. In March, the bank signed a loan agreement for additional financing of $137 million for the Dam Rehabilitation and Improvement Project (DRIP) in India. And in January, MIGA issued US$188 million in guarantees to two investors in the Nachtigal Hydropower Company, which is developing the 420-MW Nachtigal hydro project.