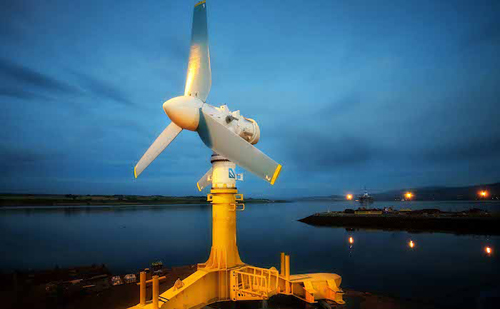 During the week of July 2, several organizations directly involved within the marine energy industry made significant announcements.

Ken Paul appointed to FORCE Board of Directors

The Fundy Ocean Research Center for Energy (FORCE) announced the appointment of Ken Paul to its Board of Directors on July 6.

Paul currently serves as director of Fisheries and Integrated Resources for the Atlantic Policy Congress (APC) of First Nations Chiefs Secretariat, a policy research and advocacy secretariat for 32 Mi’kmaq, Maliseet, Passamaquoddy and Innu Chiefs, Nations and Communities, according to FORCE.

Paul’s appointment comes after researchers at FORCE deployed a new underwater monitoring platform in the Bay of Fundy’s Minas Passage in February.

The platform, called FAST-3, is the third built by FORCE and is designed to gather data on fish presence and behavior with sensors that include an acoustic zooplankton and fish profiler, and an autonomous scientific echo sounder.

According to FORCE, Paul is primarily responsible for supporting the commercial fisheries and aquaculture among the 30 First Nation communities across the Atlantic/Gaspé region. He has also helped to facilitate work in renewable energy, environment, and climate change in the region.

Paul holds a bachelor of science from Dalhousie University and has training in leadership, policy development, mediation, labor relations and First Nations governance.

The European Commission has named Nova Innovation as the coordinator for a nine-member consortium that will expand on Nova Innovation’s existing Bluemull Sound tidal project currently operating off of the Shetland Islands in Scotland.

In this flagship project, the EnFAIT (Enabling Future Arrays in Tidal) Team, a partnership of leading European companies, will demonstrate a grid-connected tidal energy array including the addition of six turbines, which the EU said will be the largest number of devices ever deployed in an ocean energy array.

The EU said EnFAIT will build upon Nova Innovation’s existing operational site, minimizing development risk and allowing the generation of real-world results from day one. The technology used in the array has 100% EU content. The layout of the turbines will be adjusted within the project, enabling array interactions and optimization to be studied for the first time at a real tidal energy site.

The Orkney Islands Council said it is has paid £1 (US$1.29) for the Pelamis P2 marine energy device, which was previously owned by the European Marine Energy Centre (EMEC), according to a press release.

Pelamis Wave Power, which was based in Edinburgh, announced in November 2014 that it was moving into administration after having been unable to secure additional funding required for further development of Pelamis’ wave energy technology.

Pelamis started testing its P1 device at EMEC’s Orkney site in 2004, which led to the development of the 750-kW P2 devices that began testing there in 2010.

The council said immediate plans for the device’s future include looking at using it as a temporary breakwater. The council added that there are a number of potential locations across the islands where the machine could be used as a breakwater.

Currently, the device is moored at Lyness.

Scotland’s Atlantis Resources Ltd. has achieved more than a £1 million (US$1.3 million) subscription level during the first 24 hours of availability for its 5-year bond through the Abundance Investment platform, according to an Atlantis Resources July 6 announcement.

The partnership continues Atlantis‘ push into Asia. The company announced in March that it had signed a deal to supply equipment for a 150 MW project in Indonesia.