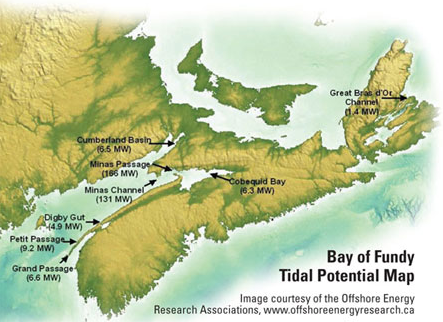 The Province of Nova Scotia and OERA have each contributed $125,000 to the project, according to the announcement.

Canada supports the Pan-Canadian Framework on Clean Growth and Climate Change and is committed to creating a cleaner environment for future generations by investing in clean technologies, according to the Canadian government.

Carr made the announcement on June 22 while visiting the Bedford Institute of Oceanography on the shores of the Bedford Basin in Dartmouth. He said the project seeks to address knowledge gaps and challenges associated with tidal energy in Canada.

According to BIO, bordered by three oceans, Canada has a 240,000-km-long coastline, the longest of any country in the world. Its continental shelf represents an area about 40% the size of the Canadian landmass.

In April, HydroWorld.com reported two efforts to conduct monitoring studies of marine life near tidal turbines received $500,000 in funding from OERA, the Nova Scotia Department of Energy and INNOVACORP, according to OERA.

OERA said the research results will lead to greater understanding of the complex relationships between tidal energy development and the biological and physical ocean environment.

This research could have significant relevance to the marine energy industry given ongoing research in other areas.

In March, a Nova Innovation Ltd.-led European tidal energy consortium announced it secured $4.6 million in funding to develop the tidal turbine power take-off accelerator in a project that will run for 36 months.

Accelerating clean technology development is a key component of the government’s approach to promoting sustainable economic growth and to supporting Canada’s transition toward a low-carbon economy.

OERA is an independent, not-for-profit organization that funds and facilitates collaborative offshore energy and environmental research and development including the examination of renewable energy resources and their interaction with the marine environment.