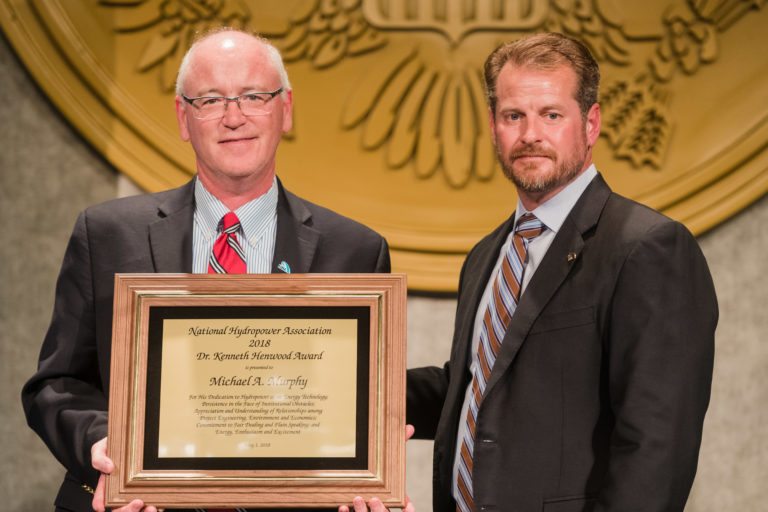 The National Hydropower Association recognized outstanding achievements in the United States’ hydro sector with the presentation of its Outstanding Stewards of America’s Waters and Dr. Kenneth Henwood awards earlier this week.

Dr. Kenneth Henwood Award — Michael A. Murphy
Serving as NHA’s de facto lifetime achievement award, the Henwood is the organization’s most prestigious honor and presented to recipients who embody the characteristics and commitment to hydro of its namesake.

This year’s recipient, Michael Murphy, was selected after more than 30 years in the hydro industry.

Murphy began his career as an attorney for Green Mountain Power, overseeing relicensing and compliance for eight hydro projects. After moving to Central Maine Power, he performed similar services for more than 30 hydro plants.

When CMP divested its hydroelectric assets in 1999, Murphy and three partners created EPRO, offering jobs to 50 former CMP employees who would have been unemployed otherwise. The firm grew to a national consulting firm with more than 150 employees before eventually being sold to engineering, consulting and construction management firm TRC. Murphy served as vice-president and National Market Director for Hydropower with TRC until his retirement in January.

“I hope that my career in hydropower demonstrates a strong belief and passion for hydropower — the belief that we’re involved in something real and valuable for today and for the future,” Murphy said. “At the end of the day, it’s such a great industry to be involved in and has so many passionate people all working on the same team.”

Murphy was a vocal advocate for hydro throughout his career, speaking before the Federal Energy Regulatory Commission, Congress and Clinton Administration while helping shape the EPAct 2005 and provisions in the Federal Power Act.

He was also active with the NHA, serving as president from 1999 to 2000, during which time he helped expand the organization’s reach through the regional meetings program and incorporation of the Hydraulic Power Committee. Murphy also severed on NHA’s board of directors, legislative affairs committee, Henwood committee and as track chair for HydroVision International’s Water Resources track, amongst many other volunteer positions, throughout his career.

Recognized in the Recreational, Environmental and Historical Enhancement category:

To protect the migrant shorebirds that flock to the region, Brookfield developed an amphibious vehicle outfitted with burning equipment that boils unwanted vegetation from the inside out. The new method is as effective as herbicide, but removes the presence of chemicals.

Whooshh uses pressure differentials to transport fish through the system, which is also capable of counting, measuring and sorting. And because the system is modular, it opens the door for more affordable fish passage at many dams, potentially expanding the market for hydro.

Recognized in the Public Education category:

To date, 5,780 habitats have been created by more than 1,100 volunteers, with the artificial brush piles covering nearly 11 acres of GRDA-managed lakes.

The initiative included evacuation procedures, vegetation management and the cleanup of invasive species near transmission lines. The plan was put into action in 2015, when a lightning strike ignited a fire that burned 7,000 acres of land surrounding the Skagit complex. However there were no injuries, no critical damage to utility-owned or historical buildings, and no long-term loss of transmission infrastructure.

Recognized in the Operational Excellence category:

The project needed to be completed between spill seasons to a reduce significant cost increase — a goal that had a very low chance of success — but to prepare, the utility worked with stakeholders to create plans for 20 potential risk scenarios and a precise construction schedule.

The efforts paid off as 19 of the scenarios were ultimately deployed, but the project itself was completed under budget and with no lost-time safety accidents, compromises to quality or contract claims. TDG values were also shown to have dropped — in some instances, to levels lower downstream than upstream of Long Lake.