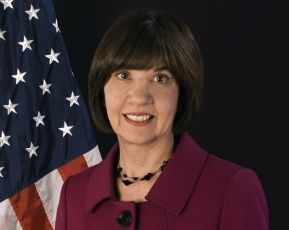 The longest serving current member and only Obama-era appointee remaining at the Federal Energy Regulatory Commission is stepping down sometime this year.

Cheryl LaFleur’s Tweet announcing her imminent departure sounded reluctant, although she did not elaborate on the reasons behind her pending resignation from FERC.

“Today I am announcing that I am no longer seeking a third term at FERC, and will be leaving the commission later in 2019,” she tweeted this morning. “While this is not the outcome I had hoped for, I feel very lucky to have served on FERC for more than eight years (and counting).”

Lafleur added that she planned to stay on until her team ended on June 30 and “probably longer, depending on my future plans the possible appointment of a successor.”

Lafleur was nominated by President Obama and confirmed in 2010. She was confirmed for a second term by the Senate four years later.

She served as chairman or acting chairman from 2013 to 2015 and in 2017. At one point, she was the only member of FERC after Collette Honorable’s resignation in 2017.

Since then, President Trump has filled the four remaining spots on the commission.

“It has been a high honor to serve at the Commission, and I love working here. I have many people to thank for the opportunities I’ve had, and will certainly have more to say as I get closer to actually leaving,” LaFleur said in her statement.

Prior to joining FERC LaFleur was an executive at National Grid, serving as acting CEO for a time. She also worked for the Ropes & Gray law firm.