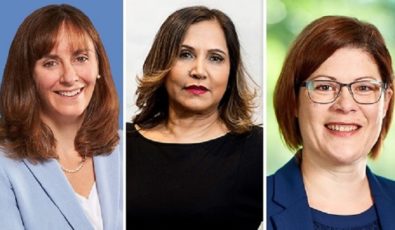 Ontario Power Generation announces that three of its leaders — Nicolle Butcher, Anju Virmani, and Emily Tarle — have been named in the Women’s Executive Network’s Canada’s Most Powerful Women: Top 100 Awards.

Since 2003, the annual awards have recognized female trailblazers, advocates and leaders who are breaking ground in their respective industries and inspiring others.

Butcher, who won under the Executive Leaders category, is OPG’s senior vice president of renewable generation and power marketing. In her two decades with OPG, she has been a trailblazer in every sense of the word, OPG said, including breaking down gender barriers. She is the first female head of an operations group in OPG’s history, overseeing all hydroelectric, gas and solar operations.

“Nicolle has been steadfast in seeking innovative business solutions and continues to break down gender barriers by mentoring women leaders across OPG,” said Ken Hartwick, OPG’s president and chief executive officer. “As the first female executive leading the Renewable Generation fleet, which provides 25 per cent of the province’s power, her example is setting the stage for the next generation of women leaders at OPG and across the energy sector.”

Anju Virmani, a member of OPG’s board of directors, won under the C-Suite category. A technology executive with more than 20 years of experience, Virmani was most recently the chief information officer of Cargojet Inc., retiring this past summer, and serves as a member of the board of directors of Ontario Health. Through her experience and knowledge, Virmani is helping to guide and lead OPG’s future, along with 10 other OPG board members. The company’s board is now comprised of more than 50% women, making it one of the most gender-diverse boards in the industry.

Emily Tarle, who was nominated under the Professionals category, serves as vice president of station engineering at OPG. She leads a team of more than 400 engineers and leaders across Ontario who support safe and reliable generation through day-to-day technical support in all areas of OPG’s operations and projects, including nuclear, hydro, solar and gas. She also works closely with Laurentis Energy Partners and is a member of the New Nuclear Review Board, supporting the development of new nuclear at OPG’s Darlington site.

The professional civil engineer began her career at OPG in 2001 as a member of the field engineering team at Pickering Nuclear Generating Station, where she provided installation, commissioning and start-up support for the return to service project.

Outside of OPG, Tarle is known for her dedication to mentorship and support for women in engineering through organizations like Women in Nuclear, the Driving Advancement for Women in Nuclear initiative, Professional Engineers Ontario, and Engineers Canada’s 30 by 30 initiative, as well as the Prosperity Project.

“Emily has a unique ability to understand the engineering issues, continually expanding her body of knowledge and guiding others through sound process and practice as engineers and business partners,” said Mark Knutson, senior vice president of engineering and chief nuclear engineer at OPG. “She trusts her team to grow and learn as they experience new challenges, and she inspires them to try again and learn from the experience.”