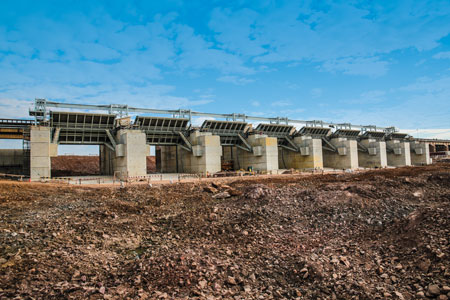 On July 18, Empresa Publica de Producao de Electricidade (PRODEL) Project Manager, Celso Pontes, announced phase one at the 40-MW Matala hydroelectric project is complete and the detailed design of the second phase is now being prepared.

According to Pontes, phase two involves upgrading the current two turbine-generators and adding a third that will increase the plant’s total installed capacity. The amount of the increase and its cost has not yet been determined.

The facility is located on the Cunene River in the province of Huila, in central Angola, on the southwest coast of Africa.

Commissioned in 1954, in 2011 facility owner, PRODEL, awarded a US$249.6 million contract to Canada-based SNC Lavalin Inc. to improve the facility’s safety and its water storage capacity.

In April, HRW-Hydro Review Worldwide reported, “The rehabilitation of the Matala Dam was primarily necessary to ensure the stability and the structural safety of the dam, which was under risk of collapsing,” according to Pontes.

During phase one of the rehabilitation and modernization, in addition to the 29 sluice gates already in operation, a further eight were added. The additional gates allow for the regulation of the flow in a more precise way.

“The rehabilitation was also required to ensure the operation of the powerhouse generating capacity and the spillway control systems in order to improve the hydraulic discharge capacity,” he said

The Matala hydroelectric is located about 180 km from the city of Lubango in southern Huila province.