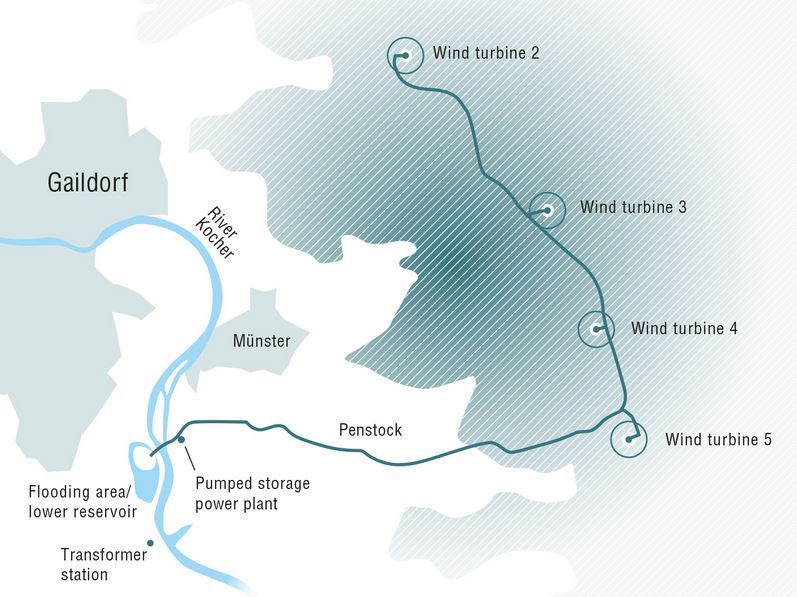 Naturspeicher is working on a pilot project combining wind turbines and pumped storage hydro on the Kocher River in Gaildorf, Germany.

The 16-MW pumped storage plant will be built on the Kocher River and the four wind turbines will be installed to the east in the upland area of the Limpurger Berge. The wind turbines have a rotor diameter of 132 meters, making them among the largest in their class, Naturspeicher says.

The company is calling this arrangement Naturstromspeicher, a natural energy storage plant combining a wind farm with a pumped storage hydroelectric power plant.

The wind farm towers are a prefabricated and fully standardized modular system with what is known as the active reservoir located in the bottom part of the turbine tower. It stands in what Naturspeicher calls the passive reservoir, an external reservoir that holds the majority of the water volume.

The Naturstromspeicher is designed for height differences of 150 to 350 meters between the lower reservoir and the reservoir basis of the wind turbines. The reservoirs are connected by a polyethylene penstock. The pumped storage powerhouse is a standardized, modular design.

In late September, GE through its GE Renewable Energy business announced it signed a turbine supply agreement with Max Bogl Wind AG to deliver and commission four wind turbine-generators for the facility.

Around the same time, Voith announced it signed a contract to deliver three reversible Francis pump-turbine units for this plant. The technology is unique in that Voith had to adapt the turbines to the special piping behavior and long penstock associated with this special arrangement.

The project is funded with a €7.15 million (US$9.11 million) grant from the Environmental Innovation Programme of the Germany Ministry for the Environment, Nature Conservation, Building and Nuclear Safety.