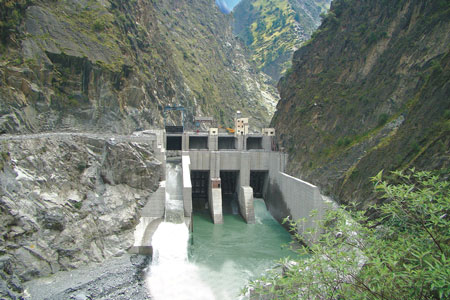 Through a structured, thoughtful maintenance program, NHPC Limited has been able to cut forced shutdowns at its 231-MW Chamera III project from 251 hours during the first year of operations to four hours and improve plant availability factor at the same time.

The 231-MW Chamera III Hydroelectric Power Station owned by NHPC was built on the snow-fed Himalayan river Ravi in the state of Himachal Pradesh, India. The power station was commissioned in July 2012 and has run successfully since then, contributing to the profit of the company.

The power station has been maintained well, with the forced shut down of generating units reduced each year to the present level of about four hours. In other words, the station tripped on fault only for about four hours during the entire year (2016 to 2017), which is a record for a hydropower plant in India. The reasons for such a high standard of maintenance are meticulous planning, high-level supervision of all components and preventive maintenance.

Annual maintenance on the generating units is performed during the lean inflow period (i.e., December to February). No major/capital maintenance was performed on the plant until 2015 to 2016. The expenditure on maintenance has been just 8% of the total annual operation and maintenance expenses of the plant. This article discusses the details of the maintenance done each year since commissioning, equipment maintenance history and various preventive actions taken.

Some modifications were made to the original scheme of the original equipment manufacturer to improve the availability of the units.

For example, during the annual maintenance period of 2016 to 2017, an abnormal sound was observed during application of the generator brake on Units 1 and 2. All six brake jacks with pads were replaced with modified brake jacks and the gap was checked. The guide pin gap with bush was reduced to 1.0 mm from 3.5 mm. These modifications improved brake operations and reduced unit outages. The same modification is planned for Unit 3. 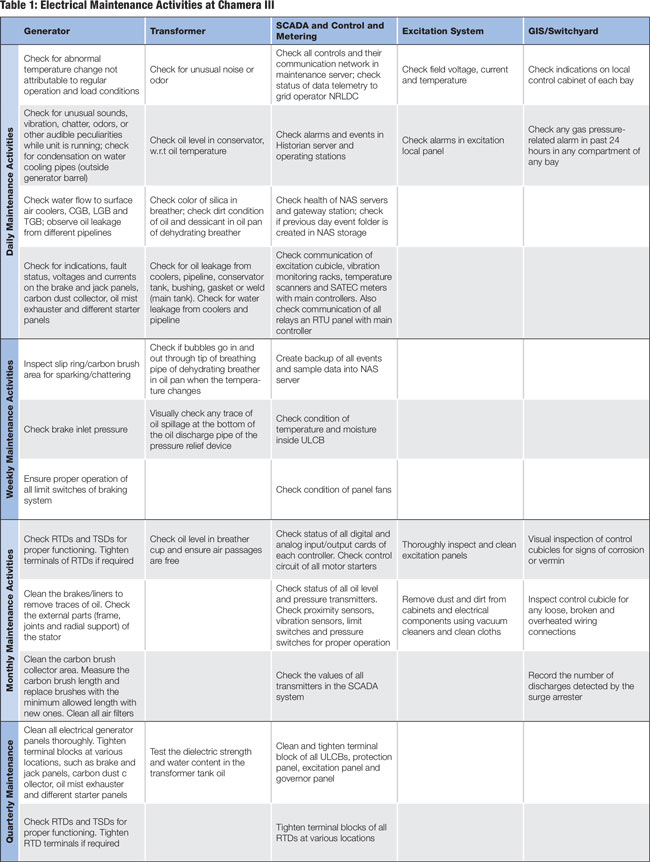 During the annual maintenance periods of 2015 to 2016 and 2016 to 2017, corrosion of the stay vanes (turbine underwater parts) was discovered on Units 1 and 3. NHPC personnel applied Loctite Nordback Pneu Wear Ceramic coating to all the stay vanes and stay rings to restrict the corrosion by silty water and further enhance unit availability.

Also during the annual maintenance periods of 2015 to 2016 and 2016 to 2017, a breakdown of the air admission valve occurred on all three units, with water entering the current collector (CC) lead of the generator.

During prestart checking of Unit 1 in the SCADA system on Aug, 16, 2015, at 18:00 hours, after five days of the unit being at rest, turbine and generator trip conditions were observed. On detailed analysis of Historian in the SCADA system, the following events were seen, all on Aug. 15, 2015:

The maintenance team performed a physical inspection at 18:00 hours and the following abnormalities were found:

In view of the alarms list in the SCADA system, it was observed that sudden abnormal water leakage beyond the capacity of the drain line 125 NB and 15 NB occurred from the air admission valve at 00:17 hours to 00:55 hours, due to variation in the tailwater level, which led to water overflow from the tank, which has a capacity of 250 liters, leading to spillage over the rotor spider arms, slip ring housing and CGB oil bath.

Water leakage occurred from the air admission valve due to breakage of the operating piston and sudden overflow/increased water level inside collection tank. It crossed the inner chamber of the NRV, further aligned along the shaft leading to entry into the CGB oil bath through an air gap of 0.3 mm between the CGB vapor seal and generator shaft.

As all units were running on >95% wicket gate opening while the plant was operating at full capacity, the units went into mechanical over speed condition due to outage of both power evacuation feeders, which might have caused damage to the air admission valve piston rod in Unit 1, causing water leakage from the water collection tank.

Water mixing occurred in the CGB oil bath only, but the alarm came in generator LGB water in oil. This was due to wrong variable tagging in the SCADA system with CGB water in oil. 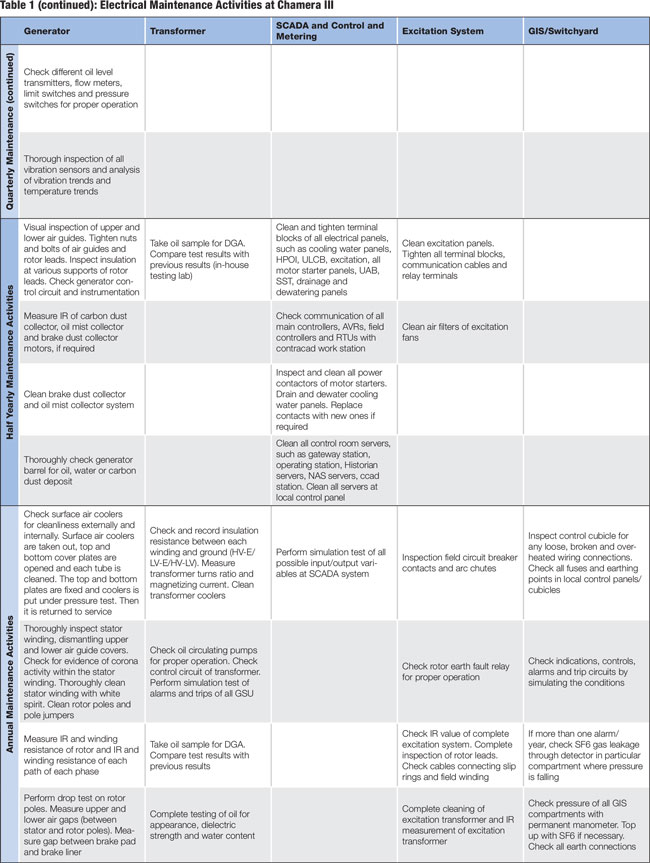 The water drain line from the NRV housing was originally in reverse slope, causing the water entry in CC lead and resulting in a rotor earth fault that caused a forced outage of the unit. Modifications performed to avoid water entry into the CC during annual maintenance in 2015 to 2016 involved modifying the slope of the NRV housing drain line so that water drains through the 125 NB line before entry into CC lead being on higher elevation level.

Another example occurred during annual maintenance in 2015 to 2016 on Unit 3. Heavy water leakage was found from the primary cooling water pump gland seal. This resulted in pump breakdown within one month of running during the monsoon period. The gland seal was replaced with a mechanical seal with TC/TC mating contacts with plan 31 (with Cyclon separator) and it is running smoothly since April 2016 and resulted in stoppage of leakage, which enhanced availability of unit.

During annual maintenance in 2016 to 2017, NHPC installed a new isolation valve in the trunnion greasing line of all three units (for NRV maintenance during unit running) and also to avoid the outage due to failure of MIV/fault in greasing system. This shall result in improvement of unit availability.

During that same period, a new globe valve was installed to replace the butterfly valve in the stator cooling water system of Unit 2. This is used for water flow regulation in the individual stator coolers, to maintain temperature uniformity in all three units and also ensure leakproof isolation of coolers for its dismantling/maintenance. This will result in improvement in unit availability.

Dissolved gas analysis (DGA) revealed that the value of ethane is on an increasing trend in the two transformers. The other gases were within limits, but ethane reached 87 on December 1, 2016 in the r-phase and 80.77 in the y-phase. Accordingly, these transformers were planned for overhauling.

The following major activities were performed during the annual maintenance (2016 to 2017) process:

After the overhaul, the DGA report revealed ethane was 3 in the r-phase and 4.732 in the y-phase.

The performance of a hydropower plant is judged by the financial (profit earned) and operational results, i.e. annual electricity generated and annual Plant Availability Factor (PAF) achieved against the normative PAF fixed by the electricity regulator (CERC in India) for each type of hydro plant under its jurisdiction. The plant is to generate as per the generation schedule finalized by CERC on a daily basis. 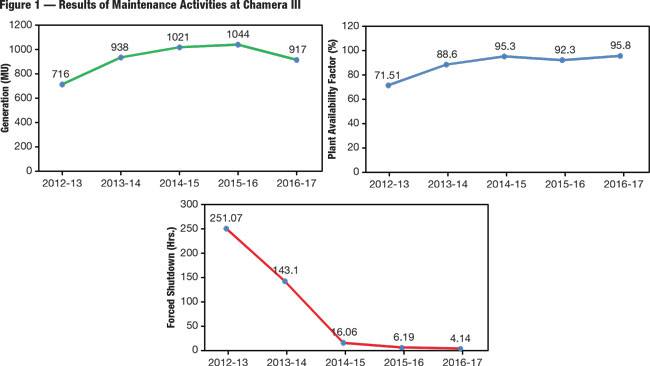 The power station will receive annual fixed charges of INR4 billion if a PAF of 85% is achieved, with greater benefits if PAF exceeds 85%.

Prashant Kaul is general manager of the Chamera III plant for NHPC Limited.