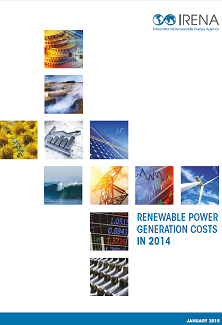 The cost to generate power from renewable sources (including hydro) has reached parity with or dropped below the cost of fossil fuels for many technologies in many parts of the world, according to a recent press release from the International Renewable Energy Agency.

IRENA’s report, Renewable Power Generation Costs in 2014, concludes that hydropower, biomass, geothermal and onshore wind are all competitive with or cheaper than coal, oil and gas-fired power stations, even without financial support and despite falling oil prices.

“Renewable energy projects across the globe are now matching or outperforming fossil fuels, particularly when accounting for externalities like local pollution, environmental damage and ill health,” said Adnan Z. Amin, director-general of IRENA. “The plummeting price of renewables is creating a historic opportunity to build a clean, sustainable energy system and avert catastrophic climate change in an affordable way.”

IRENA says that thanks in large part to the clear business case for renewable, a record high of 120 GW of renewable energy was added to the global energy mix in 2013, with similar additions forecast for 2014. Renewable energy accounted for 22% of global electricity generation and 19% of total final energy consumption in 2013.

“Hydropower produces some of the lowest-cost electricity of any power generation technology,” the report says, citing average costs of about US$0.05/kWh. “Hydropower, excluding pumped storage, is currently the largest renewable power generation source, with a global installed capacity of about 1,025 GW at the end of 2013. At good sites, it provides the cheapest electricity of any generation technology.”

The 164-page report is available here.

IRENA was founded in 2009 and is mandated as the global hub for renewable energy cooperation and information exchange by 139 members (138 states and the EU). The agency promotes the widespread adoption and sustainable use of all forms of renewable energy, including hydropower.