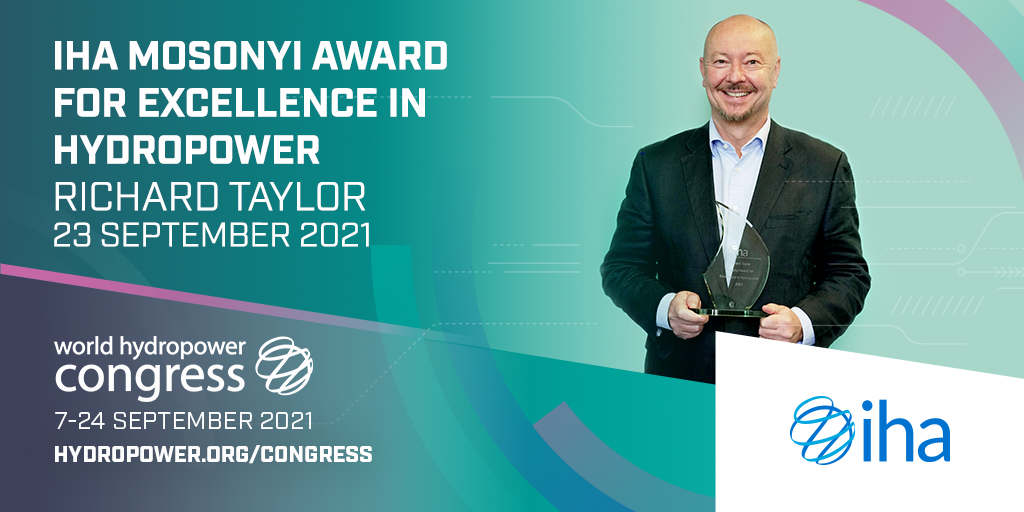 Richard Taylor, director at RMT Renewables Ltd and former chief executive officer of the International Hydropower Association (IHA), has received the 2021 IHA Mosonyi Award for Excellence in Hydropower. IHA announced the accolade on Sept. 23 at the biennial World Hydropower Congress.

The award recognizes individuals within IHA’s membership for outstanding contributions to the sector.

As one of the founders of IHA, who served as its executive director and chief executive until 2019, Taylor has had a huge impact on the hydropower sector over his career to date, IHA said.

“The name Mosonyi means a lot to me – not only because he was the founding President of IHA, but because he had previously played a big part in my education, being the author of seminal reference books on water power development,” said Taylor. “Prof. Emil Mosonyi was one of the great personalities in the history of hydropower and was at the core of establishing IHA. It was a privilege to work with him, and I’m really honored to receive an award carrying his name.”

In presenting the award, Eddie Rich, chief executive of IHA, said: “Richard Taylor is the obvious choice for the 2021 IHA Mosonyi Award for Excellence in Hydropower. This World Hydropower Congress perfectly represents the spirit that Richard embedded in IHA’s work: bringing all the key stakeholders into the same room to forge progress, build and share knowledge and lift the performance of the sector.”

“More recently, Richard developed the idea of an International Forum on Pumped Storage Hydropower which has now launched its influential findings and recommendations. In addition, he was instrumental in the building of the XFLEX HYDRO project, which is delivering ground-breaking renewable energy innovations for the future.”

Click here for more information and to watch video interviews with Taylor.