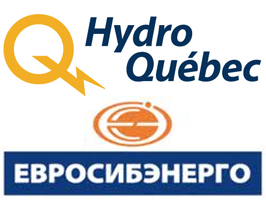 Under the agreement, Hydro-Quebec and EuroSibEnergo subsidiary Irkutskenergo will collaborate via its research institute, IREQ.

As per terms of the partnership, Irkutskenergo will get access to Hydro-Quebec’s technological innovation projects. The companies have outlined seven initial joint projects in generation and transmission, including condition-based maintenance for hydro turbines, generators and transformer service life. Hydro-Quebec said Irkustkenergo will co-finance the projects and obtain license rights on Russian territory.

“This cooperation creates new technology transfer opportunities for two leading hydropower companies, whose assets are located in very similar regions of the world,” said EuroSibEnergo official Artem Volynets. “We believe that this collaboration will not only be beneficial for our companies, but will also provide positive growth to the world’s power industry in general.”

EuroSibEnergo, part of Russia’s En+ Group, is one of the country’s largest independent power companies with a portfolio of 18 hydropower plants that have a total installed capacity of 19.5 GW.

“We are very pleased with the recognition of IREQ’s expertise in technological innovation by a company as significant as EuroSibEnergo,” Hydro-Quebec Executive Vice President of Technology Elle Saheb said.