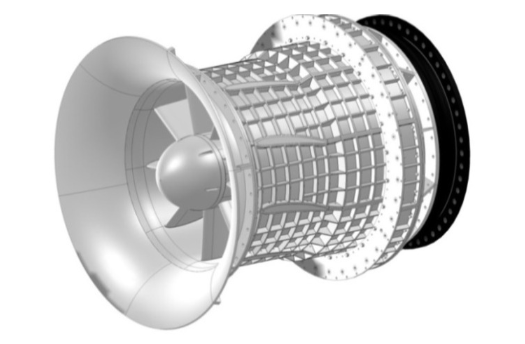 The cost for the project is not immediately available and installation of the ATS-63 unit at Brainerd Dam will be the first of its type.

Amjet Turbine Systems LLC, based in Keokuk, Iowa, announced on Nov. 28 that it has successfully completed the second round of ATS-63 power electronic control system factory testing. The system was developed in collaboration with Irvine, California-based OneCycle Control Inc.

Amjet unveiled the ATS-63 at HydroVision International 2014 and earned a US$1 million grant from the U.S. Department of Energy’s Small Business Innovation Research Phase II program.

The grant was part of DOE’s efforts to encourage small business in the development of advanced energy technologies, and its support of Amjet in the manufacturing of its new low-head turbine generators.

ATS-63 units are designed for new and existing sites with five to 42 feet in head, and 310 to 925 cubic feet per second of flow. The units can be installed in series at higher-head sites, or in parallel at sites with higher flows, Amjet said. The company said it thinks future installations of single units at different locations in the U.S. and internationally could provide power production from 100 kW to 2,500 kW and multiple unit groupings could have a total installed capacity of up to 60 MW.

According to the company, the electronic control system regulates variable speed operation while maintaining efficiency 80% over a wider head range compared to conventional hydropower equipment.

Amjet said the ATS-63 has an integrated rim generator and specialized electronic design; weighs one-fifth of a conventional unit of the same rating; and its design has a one-fifth footprint.

The 3.342-MW Brainerd hydroelectric project was originally constructed in the late 1880s in central Minnesota. The project includes the following: Brainerd Dam, a 25-foot-high concrete, L-shaped dam; a 2,500-acre impoundment; and a powerhouse containing five generating units. Guidelines set by the Federal Energy Regulatory Commission and applied by the Minnesota Department of Natural Resources determined the facility has a high-hazard dam.

In June 2014, the city of Brainerd, Minn., and its Public Utilities Commission, purchased the facility for $2.6 million. Its former owner, Wausau Paper Mills, used energy generated from the facility until it closed the mill in 2013.