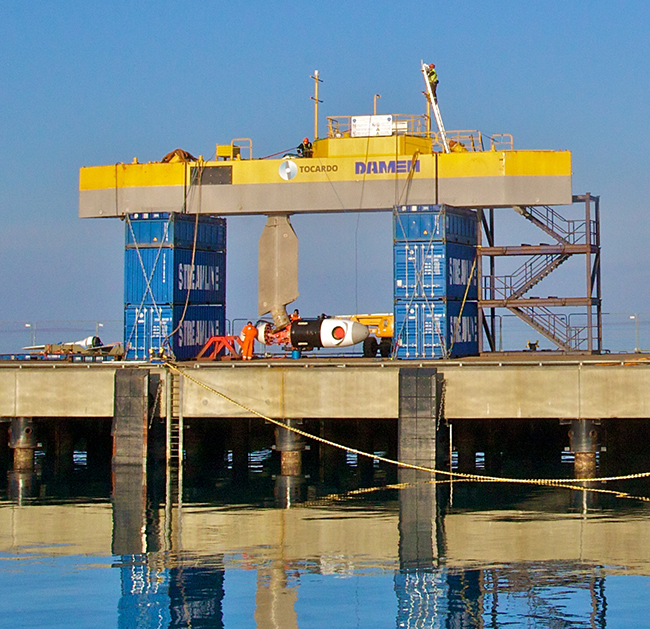 According to Tocardo, its MHK system arrived at Hatston Pier in Kirkwall on Feb. 13 prior to its planned installation at EMEC’s Fall of Warness grid-connected tidal test site, off Eday, Orkney.

In February 2016, Tocardo signed an agreement with EMEC for a 20-year pre-commercial array during which time Tocardo would install eight T2 turbines across two systems at the Fall of Warness.

Tocardo said its T2 turbines have already been deployed and proven in the Netherlands at the Eastern Scheldt storm surge barrier (Deltaworks).

According to EMEC, in 2016 the European Commission awarded just over €3.9 million (US$4.1 million) to support tidal energy testing and demonstration in Orkney waters under the Fast Track to Innovation (FTI) scheme.

FTI is part of the European Commission’s effort to reduce the time from idea to market and to increase the participation in Horizon 2020 of industry, small and medium-sized enterprises and first-time industry applicants.

The funding is split between two projects — the InToTidal project and Ocean 2G.

The InToTidal project will demonstrate integrated deployment solutions for Tocardo’s tidal turbines, according to EMEC, in partnership with EMEC, marine charter company Leask Marine, and Ifremer.

Ifremer is a French public institute created in 1984 supervised jointly by France’s Ministry of National Education, Higher Education and Research and the Ministry of the Environment, Energy and Marine Affairs. Ifremer said it works in a network with the French scientific community, but also in collaboration with partner organizations in numerous other countries.

The Ocean 2G project is being led by Magallanes, and brings together EMEC, Leask Marine and ABB to help develop the second-generation Magallanes tidal technology.