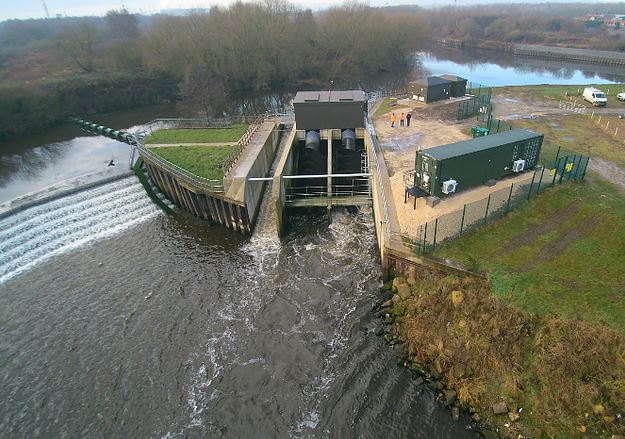 Barn Energy in the United Kingdom has installed battery storage units alongside two of its hydro projects to deliver on a two-year contract to deliver firm frequency response for the National Grid.

Barn Energy owns three hydro plants, and batteries were installed at the 260-kW Thryberg plant on the Don River and the 500-kW Knottingley plant on the Aire River. Barn Energy says this is the first time battery storage units have been deployed in the UK in combination with low-head hydro schemes.

“By co-locating the battery units with hydropower, 60-70% of the battery consumption (when performing grid balancing services such as FFR) is provided for by hydropower and the rest comes from the grid,” says Mark Simon, chief executive of both Barn Energy and sister company Eelpower Limited. “This is a significant benefit for the economics of our battery, and of our hydropower station.”

The units were built by BYD of China and installed by Anesco. They consist of lithium-ion batteires, each with a capacity of more than 1,200 kWh. Each is delivering on the FFR contract. Barn Energy says the batteries will also seek to export over TRIAD days, multiplying Thrybergh’s output by five times its original capacity and Knottingley’s by 2.5 times. TRIADs are the three half-hour periods, between November and February, when electricity demand in the UK was at its highest; each period is separated by a minimum of 10 days.

Barn Energy says both batteries were pre-qualified for the recent Capacity Market auction but chose not to take the February 2018 exit price.

The Knottingley small hydro facility was commissioned in November 2017. It features a dual Kaplan turbine-generator unit and is located at the existing Brotherton Weir. Thrybergh was completed in October 2015 and features a pair of Archimedes screw turbines.

Later this year, Barn Energy, which has been working with Eelpower Limited on the batteries, will install another battery storage unit at its 500-kW Kirkthorpe hydro scheme on the Calder River. The Kirkthorpe facility was commissioned in March 2017 and features a single Kaplan-style axial turbine.

Barn Energy has a goal to build, own and operate high-quality and economically viable low-head hydroelectric power stations, using and improving existing river structures so as to encourage fish migration and accommodate all other river users. Eelpower funds, constructs, owns and operates large-scale commercial electricity storage.

Click here for more business news from around the world.