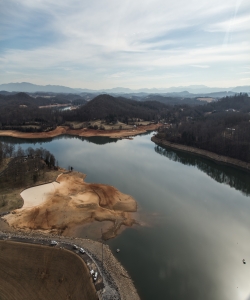 The first phase of repairs is complete on Boone Dam, which impounds Boone Lake and supplies flow to an 89-MW hydroelectric facility located at the South Fork Holston River on the border between Sullivan County and Washington County in Tennessee, according to the Tennessee Valley Authority.

Phase one was considered finished complete after a Feb. 1, “final walkdown of completed repairs and improvements just downstream of the dam,” according to TVA.

In July 2015, TVA announced it would commence repairs that could take five to seven-years to complete and cost up to US$300 million to repair seepage found in October 2014 under the dam’s embankment.

After finding a sinkhole at the structure’s base, TVA repaired it but a few days later engineers discovered additional seepage near the location of the original sinkhole. A thorough investigation revealed a complex series of underground geological pathways allowing water from both upstream and downstream sources was causing internal structural erosion.

If left uncorrected, the erosion could eventually lead to failure of the dam.

Along with drainage improvements and repairing the initial sinkhole, TVA added a new Control Building parking area at the location.

A piezometer — a device that measures the pressure of groundwater at a specific point — is installed at the sinkhole site and will provide continuous monitoring of any additional movement in the area.

The exploratory drilling and grouting program on the earthen embankment continues with the arrival of the first overnight crew Feb. 1, signaling the beginning of 24-hour, around the clock operations. It will include a multi-stage combination of grout injections and concrete.

Completion of repair phases two and three will culminate with construction of a “concrete cutoff wall” within the earthen portion of the dam.

The cutoff wall will be several feet thick, extend underground as much as 250 ft, and run the entire length of the crescent-shaped earthen section, which is from the concrete section of the dam to the parking lot near the beach area.